The Smithsonian's Art of Video Games Exhibition is seeking images of creative projects and paraphernalia inspired by video games. According to their site, they are looking for "photographs that show how video games can inspire creativity! These might include images of video-game-inspired drawings, paintings, sculptures, jewelry, clothing, events, graphics, food, wallpaper... anything, really! We're particularly interested in seeing creative and crazy costumes inspired by your...

How To Do Things With Video Games 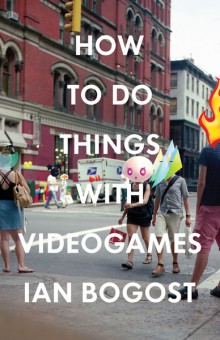 Ian Bogost, author of several books including How To Do Things With Video Games, spoke to Forbes recently in an interview about video games as a medium. He discusses the strengths of video games as a medium, the power of games in politics, and how the industry is handling adult themes in games. He also mentions the varying answers that people give to the question "what is a video game?" and how that affects whether they consider themselves gamers.

Pondering the Issue of Games in Libraries

Phil Minchin of Port Phillip Library in Australia shares his views on why games are an overlooked but important addition to libraries via a blog post on the Library Journal blog. In it, he points out a number of reasons why games should be in the collection, including that they are important elements of culture, that they foster community, and that they are art - the poetry of system.

Old Dominion University has taken the time to painstakingly recreate their library in the popular indie game Minecraft, and is currently seeking out ideas for connecting with current and potential users who play the game. According to their website, they're planning a zombie invasion on their virtual library to celebrate Halloween, and who knows what might invade them next.

Finding New Planets with the Help of Gamers

A new game called Planet Hunters, set up by a list of organizations including the University of Oxford and Yale University, enlists the help of gamers to seek out new civilizations. Or at least discover potentially new planets, by searching through NASA Kepler public release data. According to Gamasutra's article, "Every user who helps to discover a planet is then named in the acknowledgements as part of The Royal Astronomical Society monthly notices." The official report...

Online gamers have used a game called FoldIt to help decipher "the structure of an enzyme of an AIDS-like virus," helping scientists to develop "new insights for the design of antiretroviral drugs. "While the enzyme had "thwarted scientists for a decade," the entire process took the online gamers only about 3 weeks to crack.