Datamart is a data warehouse of bibliographic and administrative data copied every night from the Mirlyn/Aleph catalog. It went live in late 2012. Library staff can query these data by using dropdowns and text entry boxes provided in the interface. The results are output to a spreadsheet.

As of November 19, 2014, there have been 2833 Datamart reports run by staff in 2014.  That is more than 20 times the number of reports formerly completed by the Library Systems Office in a busy year.

Is it having an effect in Library Information Technology (LIT)?

This chart represents Library Systems Office workload in and around report requests: tickets and report requests for Aleph data (as opposed to data from the HathiTrust database), plus any questions from staff about Datamart. (In 2004, we used the original NOTIS catalog from January through June. The 2004 count below is of Aleph reports only.) 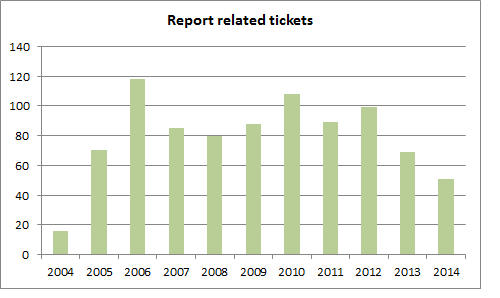 There is a significant drop in 2013 when we made Datamart available and another drop in 2014. Not exactly crickets chirping, but we’re getting there. It’s worth noting that the time saved on reports that staff can now run for themselves has allowed us to devote additional time to more complex reports requested by staff (plus there are still large categories of reports that will probably never be feasible in a self-serve system, for instance, reports against a pre-selected list of record numbers or barcodes).

What types of data are being reported?

When Datamart went live in late 2012 it had three report types: collection inventory, budget expenditures, and fund activity. I chose these three because they were the report types most frequently requested through Library Systems in past years. From the chart below you can see that they remain the most popular. 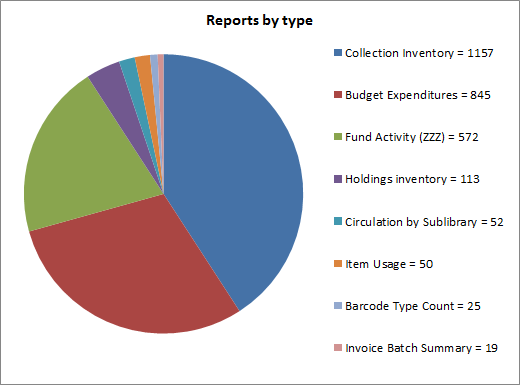 It is available only to Library staff users who can authenticate to it. In 2014 so far, 94 different staff have run reports. Of the 94 people, 52 were librarians, 38 were staff, and 4 were graduate student employees.

When do staff run reports? 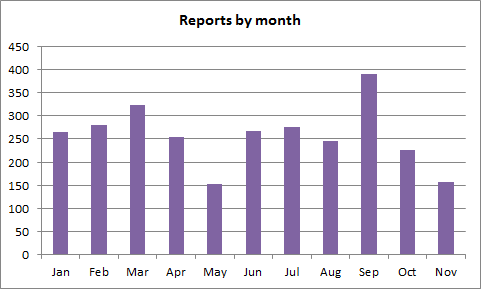 High activity in March and September is expected, but low activity in May is a surprise. May is the traditional month to do inventories, and I expected a higher tally.

Where do we go from here?

1. We plan to add links to help screens in the near future. This may actually reduce the overall number of reports, since a portion of this count no doubt represents trial and error as staff explore the interface and perfect their results.

2. People have expressed a wish for a way to save report structures to rerun later. This has proven to be more difficult than expected, but we are still pursuing it.

3. We plan to add new Aleph data and, if possible, some non-Aleph data.

Will Datamart’s popularity continue?  We’ll see where we are a year from now.

To authenticate and use Datamart (if you are a U-M Library employee): https://datamart.lib.umich.edu/