I have truly been obsessed with The Jackson family for as long as I can remember. My obsession, of course, stems from their musical achievements and, in part, because of their dynastic qualities, which border on oddity like any dynastic family, right? Lately I've been listening to Janet Jackson (Janet Jackson (1982), Dream Street (1984), Control (1986)), Rebbie Jackson (Centipede (1984)), Jermaine Jackson (Dynamite (1984)), LaToya Jackson (Hearts Don't Lie (1984) and of course Michael Jackson (Thriller (1982) Off the Wall (1983)). 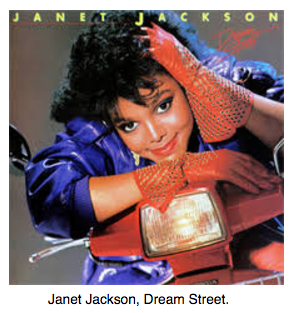 There are a few things that stand out among these Jacksons.The year 1984 was a pivotal year, as some  either to embarked upon a solo career or began with a new recording agency. Whether it was a brand new solo career or switching from Motown to Arista, what remained constant is this sense if collaboration and support and the continual artistic and creative innovation and dissemination.

There is no doubt that the Jackson name will and has  immediate buy-in. In addition to their surname notoriety, there is talent and, given the release of their albums, an efficient  marketing, branding, and scheduling machine (organization). What isn’t so apparent is the collaboration that happened within the family. For example, Michael Jackson wrote, produced, and arranged Rebbie Jackson’s single Centipede, which is her only song to make the Billboard Top 100. This is one of many examples. While my experience was not one like (I imagine) being a member of the Jackson family, it was a community of passionate, inquisitive, imaginative and respectful intellectuals who I now consider family.

The Design Lab, in many ways, was the design residents machine, face, and connector (to people, events, staff, resources). And when I say Design Lab, I am, for the most part, speaking about Justin, Shira, and Brandon. Of course, as time went on, the residences also became "The Design Lab,"  but the inception, vision, recruitment, and selection was the work of Justin, Shira, and Brandon, which, in turn, created a space that is like no other place I can immediate point to at the University of Michigan. While the residence had timelines, due dates, and deliverables that fulfilled the bureaucratic and, much like the Jacksons, the organization aspect there is a part that is unmeasurable and unplanned.

I hadn't planned to make cross-, trans- and inter-disciplinary connections and collaborations. "Collaboration" means many things to many people. I think precisely because of is its mis-use and dis-use, it has come to mean " since we all agree on a particular issue, lets work together and agree to agree." As a resident, there was disagreement on man things, but like a family (Jackson?) we discuss (face-to-face- and virtually) how to come to a consensus and move forward.The Design Lab afforded me space to create; intellectualize; collaborate; and make mistakes, which as a doctoral student is mind-blowing.   My initial project, Echo, blossomed into a larger project/collaboration with The Heidelberg Project ( House of Soul on Fire) and with SitOnIt Detroit. Additionally, I have utilized working space and resources on North Campus (Duderstadt). The Design Lab has allowed the time and space to reimagine how I can engage with my research and field of study, contribute both artistically and intellectually to a body of art and knowledge that aren't as disparate as I once thought, and revitalized my faith in collaboration and all its possibilities.

I have a fantasy that I will DJ at a local club wine cellar. I will play all the obscure Jackson music I can get my hands on.