An open discussion by library instructors about teaching ArticlesPlus.

On October 29, 2010, the Instructor College hosted a conversation on assessment with Dr. Larry Gruppen, U-M professor of Learning Health Sciences.

Welcome Back to the CVGA!

The fall semester is back upon us, and so we return to our regular hours: Mon Noon- 9pm; Tue - Fri 10am - 9pm; Sat 1pm - 9pm (closed Sunday). Actually that's an expansion on our Saturday hours from last year, as we're now opening on Saturdays two hours earlier. 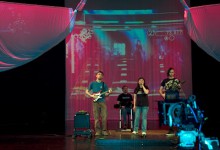