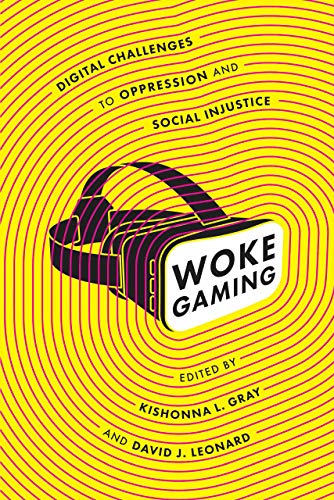 Are you interested in learning about and promoting diversity, equity, inclusion and accessibility (DEIA) in game culture and the game industry?

We have a few sections devoted to this very important topic on our research guide. Several of the resources listed on our guide can be accessed remotely, and we have highlighted a few here, along with the official summaries for each resource. We invite you to check them out.

Given the wild popularity of violent video games, it has never been more urgent to encourage dialogue about how virtual killing might shape attitudes about real-life violence. Game Over examines the nature and consequences of simulated violence, and encourages high school and college students to think critically about how gender and race are depicted in the video and computer games they play. It is sure to spark lively debate about the complex and controversial topic of violent entertainment's impact on society.

Gaming at the edge: Sexuality and gender at the margins of gamer culture

Video games have long been seen as the exclusive territory of young, heterosexual white males. In a media landscape dominated by such gamers, players who do not fit this mold, including women, people of color, and LGBT people, are often brutalized in forums and in public channels in online play. Discussion of representation of such groups in games has frequently been limited and cursory. In contrast, Gaming at the Edge builds on feminist, queer, and postcolonial theories of identity and draws on qualitative audience research methods to make sense of how representation comes to matter. In Gaming at the Edge, Adrienne Shaw argues that video game players experience race, gender, and sexuality concurrently. She asks: How do players identify with characters? How do they separate identification and interactivity? What is the role of fantasy in representation? What is the importance of understanding market logic? In addressing these questions Shaw reveals how representation comes to matter to participants and offers a perceptive consideration of the high stakes in politics of representation debates. Putting forth a framework for talking about representation, difference, and diversity in an era in which user-generated content, individualized media consumption, and the blurring of producer/consumer roles has lessened the utility of traditional models of media representation analysis, Shaw finds new insight on the edge of media consumption with the invisible, marginalized gamers who are surprising in both their numbers and their influence in mainstream gamer culture.

Gaming Representation' offers a timely and interdisciplinary call for greater inclusivity in video games. The issue of equality transcends the current focus in the field of Game Studies on code, materiality, and platforms. Journalists and bloggers have begun to hold the digital game industry and culture accountable for the discrimination routinely endured by female gamers, queer gamers, and gamers of color. Video game developers are responding to these critiques, but scholarly discussion of representation in games has lagged behind. Contributors to this volume examine portrayals of race, gender, and sexuality in a range of games, from casuals like Diner Dash, to indies like Journey and The Binding of Isaac, to mainstream games from the Grand Theft Auto, BioShock, Spec Ops, The Last of Us, and Max Payne franchises. Arguing that representation and identity function as systems in games that share a stronger connection to code and platforms than it may first appear, 'Gaming Representation' pushes gaming scholarship to new levels of inquiry, theorizing, and imagination.

Race, gender, and deviance in Xbox live: Theoretical perspectives from the virtual margins

Race, Gender, and Deviance in Xbox Live: Theoretical Perspectives from the Virtual Margins provides a much-needed theoretical framework for examining deviant behavior and deviant bodies within one of the largest virtual gaming communities—Xbox Live. Previous research on video games has focused mostly on violence and examining violent behavior resulting from consuming this medium. This limited scope has skewed criminologists' understanding of video games and video game culture.

Xbox Live has proven to be more than just a gaming platform for users. It has evolved into a multimedia entertainment outlet for more than 20 million users. This book examines the nature of social interactions within Xbox Live, which are often riddled with deviant behavior, including but not limited to racism and sexism. The text situates video games within a hegemonic framework deploying whiteness and masculinity as the norm. The experiences of the marginalized bodies are situated within the framework of deviance as they fail to conform to the hegemonic norm and become victims of racism, sexism, and other types of harassment.

From #Gamergate to the 2016 election, to the daily experiences of marginalized perspectives, gaming is entangled with mainstream cultures of systematic exploitation and oppression. Whether visible in the persistent color line that shapes the production, dissemination, and legitimization of dominant stereotypes within the industry itself, or in the dehumanizing representations often found within game spaces, many video games perpetuate injustice and mirror the inequities and violence that permeate society as a whole.Drawing from groundbreaking research on counter and oppositional gaming and from popular games such as World of Warcraft and Tomb Raider, Woke Gaming examines resistance to problematic spaces of violence, discrimination, and microaggressions in gaming culture. The contributors of these essays seek to identify strategies to detox gaming culture and orient players and gamers toward progressive ends. From Anna Anthropy's Keep Me Occupied to Momo Pixel's Hair, Nah, video games can reveal the power and potential for marginalized communities to resist, and otherwise challenge dehumanizing representations inside and outside of game spaces.In a moment of #MeToo, #BlackLivesMatter, and efforts to transform current political realities, Woke Gaming illustrates the power and potential of video games to foster change and become a catalyst for social justice.

This study demonstrates broad-based, second-order cultivation effects from video game play and provides a significant contribution to our understanding of how virtual representations of race and ethnicity may impact real-world racial and ethnic beliefs. This research used a survey design to assess the relationship between White college students’ frequency of video game play and attitudes toward Blacks and Asians. Results suggest that video game play cultivates real-world beliefs about Blacks, such that individuals who spend more time playing video games have less egalitarian views of Blacks. Interracial contact was explored as a moderator but had no influence on the relationship between game play and stereotyping. Results are discussed from a cultivation theory as well as a social identity theory perspective.

Playing With Prejudice: The Prevalence and Consequences of Racial Stereotypes in Video Games

A content analysis of top-selling video game magazines (Study 1) and of 149 video game covers (Study 2) demonstrated the commonality of overt racial stereotyping. Both studies revealed that minority females are virtually absent in game representations. Study 1 revealed that, in video game magazines, minority males, underrepresented generally, were more likely to be portrayed as athletes or as aggressive, and less likely to be depicted in military combat or using technology, than White males. Study 2 also showed evidence of the “dangerous” minority male stereotype in video game covers. Again, underrepresented overall, minority males were overrepresented as thugs, using extreme guns, and also as athletes. Study 3, an experiment, exposed players to both violent and nonviolent games with both White and Black characters. Participants were faster at classifying violent stimuli following games with Black characters and at classifying nonviolent stimuli following games with White characters, indicating that images of popular video game characters evoke racial stereotypes.

This article focuses on questioning and theorizing the visual and discursive disappearance of blackness from virtual fantasy worlds. Using EverQuest, EverQuest II, and World of Warcraft as illustrative of a timeline of character creation design trends, this article argues that the disappearance of blackness is a gradual erasure facilitated by multicultural design strategies and regressive racial logics. Contemporary fantasy massively multiplayer online role-playing games (MMORPGs) privilege whiteness and contextualize it as the default selection, rendering any alterations in coloration or racial selection exotic stylistic deviations. Given the Eurocentrism inherent in the fantasy genre and embraced by MMORPGs, in conjunction with commonsense conceptions of Blacks as hyper-masculine and ghettoized in the gamer imaginary, players and designers do not see blackness as appropriate for the discourse of heroic fantasy. As a result, reductive racial stereotypes and representations proliferate while productive and politically disruptive racial differences are ejected or neutralized through fantastical proxies.

The Accessible Game Book contains games specifically chosen or adapted for mixed groups including people with auditory or visual impairments, those in wheelchairs, and those with multiple disabilities. The games can also be used as a means of improving disability awareness among the non-disabled, and have been used successfully in the rehabilitation of stroke victims and groups of people of all abilities and ages.Each game is explained clearly, with symbols to indicate the level of ability, suggestions for elaborations or modifications, and important points to remember. Full details are given on any materials required for the games and whether the game requires small (fewer than 10 people), medium (10-40) or large (40 or more) groups. The Accessible Games Book is an important resource for those running playschemes or youth groups, or in training or educational situations.

You can check out more resources related to DEI&A in gaming on our research guide.