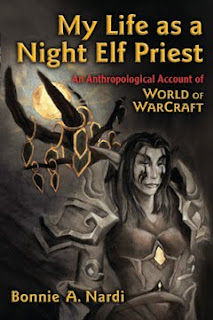 Our colleagues at the University of Michigan Press have released My Life as a Night Elf Priest: An Anthropological Account of World of Warcraft by Bonnie Nardi. Here's the blurb:

World of Warcraft is currently the most popular online world game on the planet, with more than 12 million subscribers—officially making it an online community of gamers that has more inhabitants than the state of Ohio and is almost twice as populous as Scotland. It's a massively multiplayer online game, or MMO in gamer jargon, where each person controls a single character inside a virtual world, interacting with other people's characters and computer-controlled monsters, quest-givers, and merchants.

In My Life as a Night Elf Priest, Bonnie Nardi, a well-known ethnographer who has published extensively on how theories of what we do intersect with how we adopt and use technology, compiles more than three years of participatory research in Warcraft play and culture in the United States and China into this field study of player behavior and activity. She introduces us to her research strategy and the history, structure, and culture of Warcraft; argues for applying activity theory and theories of aesthetic experience to the study of gaming and play; and educates us on issues of gender, culture, and addiction as part of the play experience. Nardi paints a compelling portrait of what drives gamers online both in this country and in China, where she spent a month studying players in Internet cafés.

Bonnie Nardi has given us a fresh look not only at World of Warcraft but at the field of game studies as a whole. One of the first in-depth studies of a game that has become an icon of digital culture, My Life as a Night Elf Priest will capture the interest of both the gamer and the ethnographer.

You can read the book online for free, or buy a copy of the print version if you prefer atoms to bits.