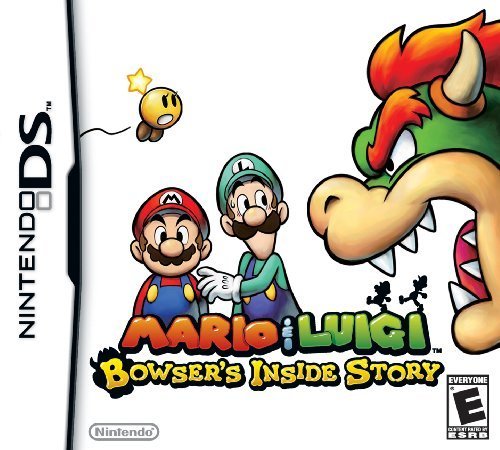 Professor Layton. Even beyond Layton and his sidekick Luke there are a whole range of really awesome DS games like Scribblenauts, Hotel Dusk, and Rhythm Heaven (all of which we have at the archive). But today I want to talk about Mario & Luigi: Bowser's Inside Story. It's actually the third in the Mario & Luigi RPG series that first appeared on the Game Boy Advanced in 2003. Playing as either Mario and Luigi (in tandem) or as Bowser you battle Lord Fawful, the villain of the piece. Fawful says the most epic things, most notably "I HAVE CHORTLES" but there are many other gems like "Oh, I am feeling the power! It high-fives Fawful's face!" and "I have uneasiness...Bowser keeps appearing like an ugly rabbit from the hat of a magician who stinks!" Hilarious.

This game takes advantage of many features of the DS, including using both the top and bottom screen, the microphone, and the stylus. The game play is turn-based battles mixed up with platforming elements in between. The story takes place both outside in the Mushroom Kingdom and inside Bowser's Body (hence the title). I took this game with me on a recent bus trip out to DC and back and I was totally absorbed in it both ways until the battery died. There is plenty of genuine humor, a lot of cheese and some really solid game play to keep you going. I've clocked about 30 hours with the game in total over the course of the semester and would recommend it to anyone with a DS.