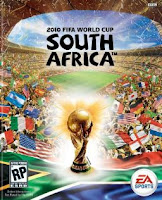 World Cup Fever is sweeping the nation, and the CVGA is no exception!

Those of you who follow this blog know that FIFA 10 has been one of our most popular games; so much so that the inner ring of the disc is starting to crack and deteriorate!

But did you know that we have many other soccer games in the archive as well?

Arriving today in the archive are two new games: 2010 FIFA World Cup. South Africa for the Xbox 360 and Pure Futbol : Authentic Soccer for the PS3.

If you want some handheld soccer action, we have FIFA 09 for the PSP.

If you prefer to manage a soccer team, we have Football Manager 2010 installed on our gaming PC.

Going back a generation, we have FIFA 06, Winning Eleven 8 and 2002 FIFA World Cup all for the original Xbox; and FIFA 02 for the GameCube.

On even older systems, you can play FIFA 96 on the Sega Genesis, or Mia Hamm Soccer 64 on the Nintendo 64.

And for some real old-school gaming action, we have World Cup Soccer on the Intellivision.

Maybe we should have a soccer day, where every gaming station in the archive is dedicated to one of our soccer games?