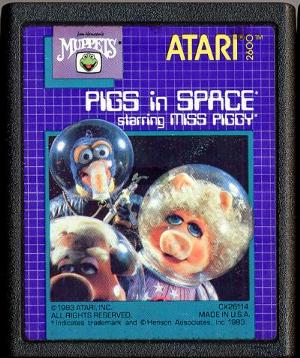 Wednesday is highlighting Retro Games, or games from the late 1980s through the mid-1990s. The CVGA has a bunch of retro consoles to choose from, including the original Nintendo Entertainment System and Super Nintendo, the Sega Genesis, Atari and even an upright Arcade Legends game that has over a hundred arcade games. The CVGA has an assortment of awesome games for each of these systems. Below is just a sampling of what’s being stored in the archive, just waiting for you to come try them out:

Super Mario World (SNES):  Released in 1991, Mario World is the fourth game in the Super Mario series, but arguably the most fun. The plot of the game is for Mario and his brother Luigi, our intrepid Italian brother plumbers are on vacation in Dinosaur Island.  Bowser's kids are really fun mid-bosses. All the things you love about Mario remains in this game, but now you get to ride Yoshi!

Wario's Woods (SNES): Wario's Woods is a falling-block puzzle game.  Wario has infiltrated the Mushroom Kingdom and is filling the area with monsters and it's up to Toad to get rid of those monsters by blowing them up after they fall from the sky using bombs that match the monster's color. There are two ways to play this game. There is the standard one-player version, where the player races against the clock to clear the screen of monsters. The other way to play is to race against another player. The first to clear their screen wins.

Castlevania (NES): Even in the 1980s people loved vampire-themed media! Released in 1986, the popular game, Castlevania sets you up to play as Simon Belmont, the most recent in a long family line of vampire-hunters. Your mission: hunt vampires, obviously! The game is pretty basic, you go through each level and kill vampires and other assorted monsters with your magic whip. The best part is that  the final boss is Count Dracula himself. Big parts of this game are based on Bram Stoker's Dracula, so if you know the book, it adds something extra to the gameplay.

Legend of Zelda (NES): Originally released in the United States in 1988, this game remains popular for a reason. The action is really great, Link is a likeable character and the adventures are challenging. It is a simpler game than its sequels, but still stands the test of time. It's worth a few hours to see where the Legend of Zelda began.

Bubble Bobble (Arcade Legends): One of many MANY games in this upright arcade system, Bubble bobble is deceptively simple. The dragons, Bub and Bob move along different platforms and try to burst the enemy’s bubbles with bubbles of their own. This can be either a one or two player game, so bring your friends! You will lose track of time so quickly playing this game! 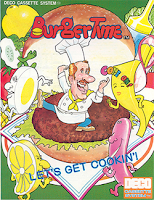 BurgerTime (Arcade Legends): Another simply awesome game! The main character is Chef Pepper, and he’s making burgers. The player moved Pepper around so he can assemble burgers from the available ingredients. That’s not all! Chef Pepper must also fight Mr. Hotdog, Mr. Pickle and Mr. Egg by dropping ingredients on them. 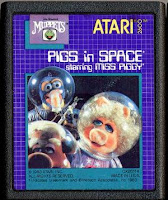 Pigs in Space (Atari): Released in 1983, this game is quite old, but offers a nostalgic look at both classic Atari 2600 games, and a very funny sketch from the old Muppet Show, also called, "Pigs in Space". Much like the format of the Muppet Show, Pigs in Space the game parodies popular Atari games and adds the Muppet flair. This game offers a lot of simple nostalgic fun and charming Muppet characters.

Sonic the Hedgehog (Genesis): This was originally released in 1991.  Sonic is   trying to prevent Dr. Robotnik (aka Dr. Eggman for those who play the Japanese version) from stealing chaos emeralds. You run through levels to collect golden rings and to catch up with Robotnik. Every so often, Sonic must battle Robotnik to move on to the next level. This is a beautiful game filled with bright colors and challenging gameplay. The CVGA has the Genesis game on the shelves, and is waiting to be played!

Where in the World is Carmen Sandiego? (PC): The CVGA has retro computer games as well. This game has had several re-releases through the 1980s and mid 1990s, and the archive has several of these games loaded on their PCs. Carmen Sandiego, a professional, and very stylish thief steals something from a particular country. You are an elite detective trying to catch Carmen. You gain clues by talking to local characters in each country. You must sort through these clues and catch up with Carmen before she can escape.  The game is aimed at kids trying to learn geography, but it is also a whole lot of fun. You lose yourself in the adventure and cheesy jokes!
*Fun Fact! Atari has put a bunch of their old games on their site (www.atari.com) that you can play for free! Now you have the choice of coming to the archive to play, or stay at home!*
*all images came from the game’s Wikipedia site.