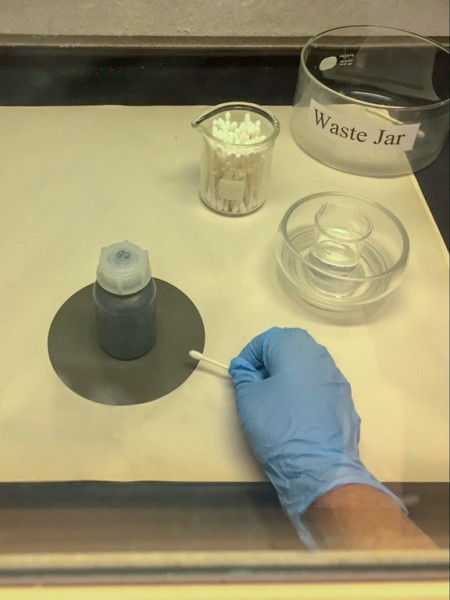 Part 1 left off under the fume hood in the Conservation Lab when the original plan was to clean the disks using a HEPA VAC and complete one final round of imaging. But like most plans, especially when they deal with vintage equipment, they change. In total, we completed 4 rounds of imaging, adding an ethanol solution and a final “wildcard” round to the mix. The results? Inconclusive.

The Setup We used a HEPA vacuum to remove mold for the first round of cleaning. HEPA stands for High Efficiency Particulate Air, which means that it can trap micro-particles in its filter. We placed the vacuum hose inside the fume hood close to the 5.25” floppy disk and used weights to hold down the hose. The disk itself was placed on a Tyvek square for easy rotation. To dust off loose debris that might be on the disk, we swept the disk with a soft paint brush and swept towards the hose. 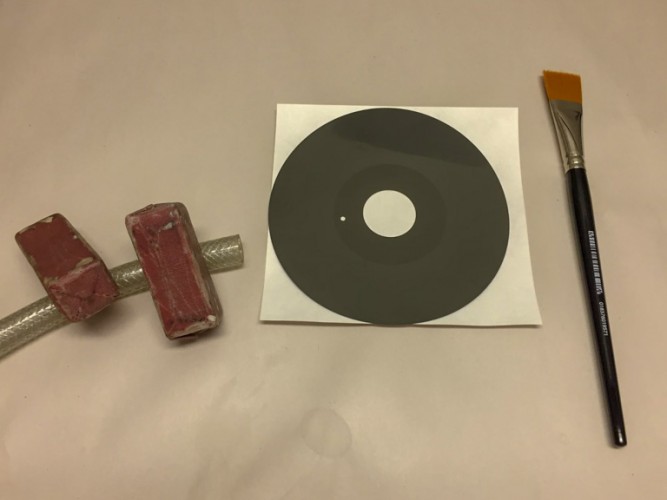 The Process This process was not successful in clearing the mold with much of it remaining visible. Even though it looks like a dry, white powder that could easily be swept up with a brush, the amount of time that has elapsed between now and when the mold first appeared may have melded it to the iron oxide coating. Some mold might have been brushed away but it is impossible to say without examining each disk under a microscope.

Results 20 disks out of 111 disks improved after vacuuming, returning less read errors than its initial image. Two of those 20 were unreadable during the first round and imaged this time with zero bad sectors.

The Setup Since mold was still present and because there is always room for improvement, we decided to clean the disks with obvious amounts of mold using a 70:30 ethanol-water solution. Ethanol helps kill mold while water helps slow down the fast evaporation properties of ethanol. Deionized water was used for its purity and availability in the Conservation Lab. Its “ion-hungry” properties may have affected the disks magnetization but the risk was considered minimal compared to tap water, which could leave minerals behind and interfere with the drive's ability to read. We also felt more comfortable with this decision because we now had two images of each disk. The HEPA vacuum was swapped out for a 50mL beaker and paintbrush replaced with cotton swabs, everything else in the fume hood remained the same. 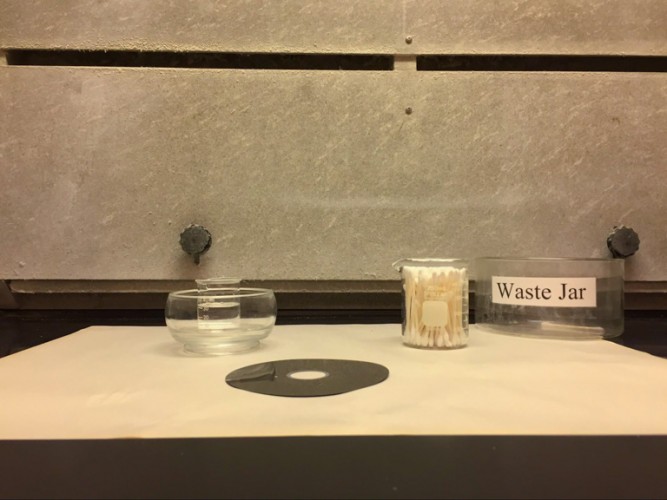 The Process To prolong the life of the 70:30 ethanol-water solution that was prepared for us by the Conservation Lab, a small amount was poured out into a 50mL beaker. We placed the beaker in a bowl as a precaution to contain any accidental spills. A cotton swab was then dipped into the solution and applied to the disk in a circular motion. Cleaning the disk in a circular direction as opposed to a radial direction runs less risk of ruining the data on the disk in case of a scratch because of the way the sectors are laid out. [1] (see featured image at the top of this post)

Results 43 disks were cleaned with the ethanol-water solution. Eight disks were imaged with less read errors than the initial and HEPA vacuum rounds while 18 stayed the same and 17 worsened.

Mold is one variable among many that can interfere with the imaging of 5.25” floppy disks. The disk’s age, manufacturer, as well as hardware and software, can all have an effect on imaging.  For example, our drive stopped recognizing disks midway through round two’s imaging and needed to be cleaned. A dust or mold particle could have been floating around and throwing out read errors before it stopped the drive from working altogether. Given these factors, we did one final round of imaging just to see how much variance there is at play.

Disks that became unreadable after vacuuming or the ethanol-water solution were not permanently harmed by those processes. Many disks that had multiple read errors after these rounds returned to the same number of read errors as in the initial round of imaging or less. Six disks out of the 43 that went through both processes were able to get their best read during this final round. Whether a disk is cleaned with a HEPA vacuum or an ethanol-water solution is not a concrete determinate in imaging.

All in all, the imager’s patience might play the largest role in successfully imaging 5.25” floppy disks. Our multiple rounds resulted in 25 successful images that we would not have had otherwise. A disk may not image the first time, but it might the second, third, or even seventeenth time.

If this were to happen again, the HEPA vacuum and ethanol-water solution would be used as a last resort. It might be more worthwhile next time to run a disk through the imaging software multiple times, as-is and after re-housing, to attain an error-free image instead of lugging out equipment to clean the disks now that we know how much variance can occur. Looking back, it would have been interesting to image the disks after they were re-housed to see if mold spores in the plastic jackets were the ones interfering the most with reading. Hopefully, the next time a box of 5.25” floppy disks is opened they will be absolutely pristine. On the off-chance they are not, we are better prepared because of this great mold experiment.