The following post was authored by Leigh Gialanella, graduate of the UM School of Information and former student employee in the Library’s Digital Preservation Office. Leigh now works at the Smithsonian National Museum of Natural History as a contract archivist, working with United States Geological Survey collections.

Together with project assistants Andrea Kang and Christina Min, we began work to image the 466 3.5 inch floppy disks in the Robert Altman Digital Physical Media Collection. Between consulting our collection inventory (compiled by former project assistant Jennifer Kremyar) and making our own observations, we have developed an understanding of what materials are present in the collection.

Disk Types Because Robert Altman was a Macintosh user, a large number of floppy disks in his collection are formatted for apple computers. Common manufacturers within his collection include Maxell, IBM, Sony, 3M, TDK, Memorex, and KAO. The majority of floppy disks are double-sided and high-density (HD), containing approximately 1.4-1.44 MB of storage space. This makes sense given that double-sided, HD 1.44 MB disks became the most commonly-used floppies during the late 1980s. The Digital Physical Media collection does, however, contain a few single-sided and/or double density (DD) disks. These typically hold 400 KB, 720 KB, 800 KB, or 1.00 MB of content. Newer 1.44 MB disks formatted on Apple machines are readable using USB 3.5 drives, while older formats like 800k and 400k can only be read using vintage equipment.

Based on notes in the inventory and annotations on disk labels, we can safely assume that all the floppy disks in the collection originated during the 1980s and 1990s. Many of the floppy disks include scripts, drafts, and cast lists pertaining to Robert Altman’s works. Enthusiasts of Robert Altman’s work will be delighted to learn that the floppy disks contain scripts and documentation associated with such films as The Player, Prêt-à-Porter, Cookie’s Fortune, and Kansas City, among others. Other floppy disks, meanwhile, capture computer backups, logs, invoices, and other administrative files. 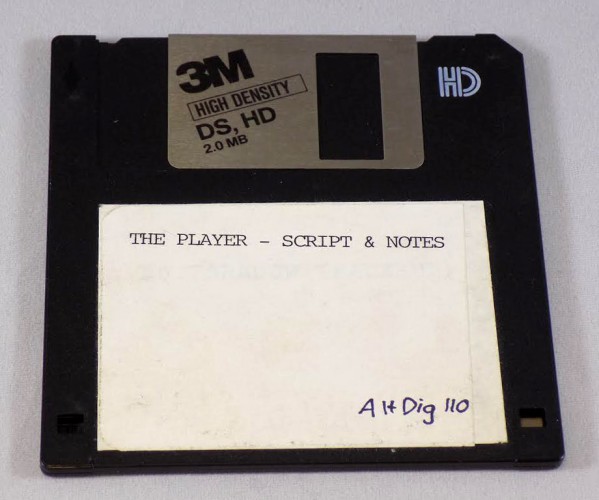 Prior to entering production mode, it was impossible to predict whether or not the floppy disks would image and mount successfully. Most of the floppy disks appeared to be in good shape. A small number of three-and-a-half-inch floppies stood out from the rest due to missing sliders, broken or bent sliders, oversized-labels, and other physical issues. Although these physical abnormalities had the potential to complicate the disk insertion process, it was not immediately clear whether they would impact the imaging of the disk. Nor was it clear whether all of the non-damaged disks were free from corruption themselves.

Imaging Results Of the 466 three-and-a-half-inch floppy disks we handled from the Altman collection, 397 were successfully imaged and placed in preservation storage. Of the 69 disks that were not imaged, 22 are reported as "unreadable" by our software, which leads us to believe these are disks formatted in some other way (perhaps for a word processor), rather than being corrupt or damaged. We will continue to explore options to retrieve content from these disks. All of the physically damaged disks were imaged successfully.

The remaining 47 disks that were not imaged are 800k disks that are not readable by our equipment. The Digital Preservation Office is currently testing vintage equipment to see if these disks are readable on older machines. Thus far, one floppy disk was recognized on a Power Macintosh 8500/120, leading staff members to believe that more will follow suit. The results of this experimentation will form the basis of a new workflow for processing 400K, 800K, and other floppy disk formats.

We will update you on the 800k workflow in a future post, as well as some general conclusions we have drawn form completing our first production run of 3.5 inch floppy disks!