For over two decades Virginia Hyvarinen, a retired librarian and Detroit native, meticulously collected every source of information she could find concerning the history of radicalism in Northeastern Minnesota and, in particular, the life of neglected radical journalist Jack Carney. In 2009 she donated this archive to the Joseph A. Labadie Collection at the University of Michigan’s Special Collections Library.

A man once described by Eugene V. Debs to be “as true a comrade and valiant a warrior as ever gave his life to his class and to humanity,” Carney was a prolific left-wing journalist who edited or wrote for various labor, socialist and communist newspapers in Ireland, Britain and America during the decades prior to his death in London in 1956. He is today perhaps best remembered for his two decade long close association with the prominent Irish socialist and labor leader, “Big Jim” James Larkin.

Hyvarinen’s collection has largely remained unprocessed until now. In 2010, while preparing an article for publication in the annual journal of the Irish Labour History Society, James Curry, a history and digital humanities doctoral candidate from Ireland specializing in the early 20th century Irish labor press, inquired about the Jack Carney related materials in the Labadie Collection. The ensuing correspondence eventually led him to apply for a travelling research grant from his home institution, the Moore Institute, National University of Ireland, Galway. Through an endowment from Edward Weber, the Labadie Collection’s second curator (from 1960-2000), Mr. Curry has been provided with campus lodging and a stipend to spend one month in Ann Arbor researching the Carney materials.

As well as currently beginning the task of organizing the vast collection of donated material into a coherent set of documents, Curry will also be giving a free public talk on his placement and the story of Carney’s life later this month. In addition, he will write a brief biographical entry on Carney, complete with visual imagery from the Hyvarinen papers, for a digital library project.

Curry’s talk, entitled “Who Is This Jack Carney?”, will take place on Monday April 27th in the Hatcher Library Gallery at 4:00 p.m. Please join us as he leads us on this unique international journey through Ireland, England and America and tackles some of the mysteries regarding a neglected but captivating radical. 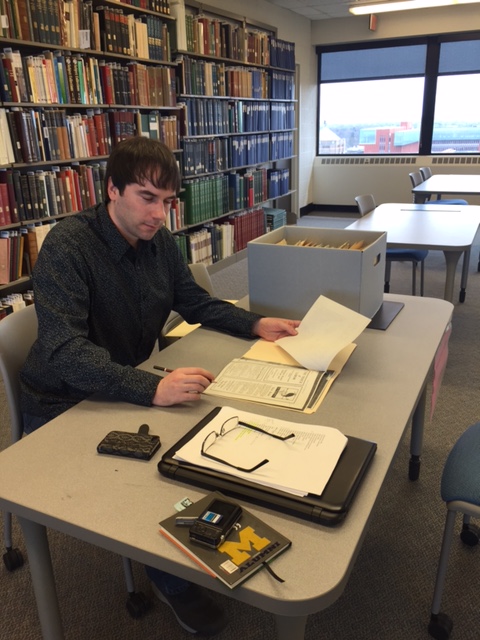