This Wednesday's watermark comes to us once again from the Islamic Manuscripts Collection - one of the papers in Isl. Ms. 525 to be exact. This manuscript was copied in Istanbul in 1767.

The watermark features a small, roughly symmetrical cluster of round grapes with slightly curved stem and crown above. It is paired with a mark of only partially legible words / names referencing the papermaker and region.

A tremendously popular motif among French papermakers [1], a vast number of grape or raisin watermarks are attested. The grape cluster may be large or small, fluid or symmetrical, naturalistic or stylized, with drop-shaped or round grapes. The cluster may appear with or without a stem that may be curved or looped and drawn in one line or two and might be accompanied by still another motif such as a crown, cartouche, leaves, or shield. Often the mark will include signature elements such as initials or even a full personal or place name. In some cases even a year will be present.

Raisin watermarks featuring small symmetrical clusters of round grapes (in a stylized fashion) were especially popular among the French papermakers exporting their products to the Levant and other Ottoman areas from the late 17th century through the late 18th century[2]. These papers are significantly represented in our Islamic Manuscripts Collection, with more than 100 volumes including at least one paper with such a raisin mark. The majority of these are dated to the 18th century.

Within this subset of raisin marks there is still great variety as we can see from the listings of Heawood [3] and Velkov [4] and a quick survey of collection examples.

The mark in one of the front flyleaves of Isl. Ms. 226 is quite similar to the mark we have already seen from Isl. Ms. 525.

It features a small symmetrical cluster of round grapes with curved stem and crown above. Yet another type of this same mark appears elsewhere in the manuscript, which was copied in 1783.

The raisin mark appearing across the fold in the paper of Isl. Ms. 516 (begun in Kayseri and completed in Erzurum in 1729) is quite similar to the marks we have already seen, but it includes a cartouche with initials between the stem of the cluster of grapes and the crown. 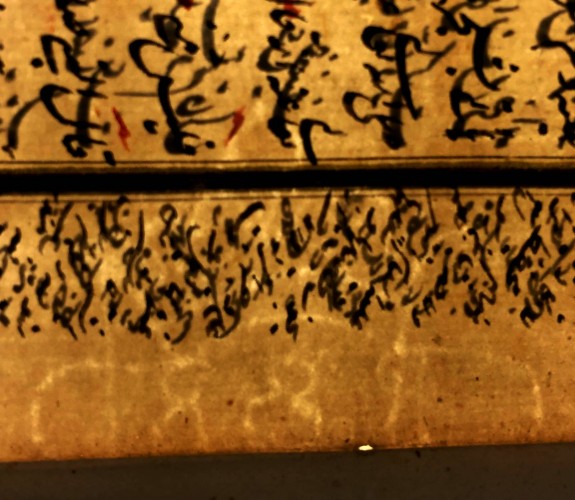 Another version of this raisin mark with a different type of crown and other initials appears in one of the papers of Isl. Ms. 32, in a portion of the manuscript likely transcribed around 1691.

A raisin mark appearing in one of the papers of Isl. Ms. 380 (copied in 1700, possibly in Bursa) continues the theme, but with a full word / name in the cartouche.

The name is only partially legible and easier to make out in some instances of the watermark than others. Consulting several different instances within the manuscript as well as possible readings from watermark references (such as the list Briquet provides [5]) can aid our reading. Still, we might only be able to make out a few letters with certainty.

A raisin mark appearing in Isl. Ms. 444 (a manuscript which features many raisin watermarked papers) includes not only a long cartouche with name, but also a date, 1742.

Regardless of the legibility, knowledge of the historical situation also suggests a reading of 1742 for the year. Dating in watermarks was officially imposed in France in 1741 and came into general practice from the following year. Many papermakers incorporated the 1742 date into their marks but took no interest in changing the dates in their moulds until decades later [6]. Thus many marks from the mid-18th century include the year 1742. Nevertheless, the dated mark allows us to suggest a tentative dating for the transcript, at least within a couple of decades following the year 1742[7].

Of course this sampling is but a taste of the many late 17th and 18th century raisin marks attested, but hopefully it has wet your appetite for fruit of the vine marks!

[2] See p.82-84 in Terence Walz, "The Paper trade of Egypt and the Sudan in the Eighteenth and Nineteenth Centuries and Its Re-export to the Bilad as-Sudan," InThe Trans-Saharan Book Trade: Manuscript Culture, Arabic Literacy, and Intellectual History in Muslim Africa, Eds. Graziano Krätli and Ghislaine Lydon (Leiden : Brill, 2011): 73-108.

[7] As the examples of dated marks in Briquet attest (those from J. and M. Johannot, R. Montgolfier, etc.), such marks could appear in papers many years, even decades, after the 1742 date referenced in the mark. Again see Briquet, Les Filigranes, v.4, p.646.