On Feburary 18, 1970, University of Michigan students gathered en masse to protest General Electric interviewing and recruiting students on campus. GE had been a contractor for the U.S. Department of Defense during the Vietnam War, and students responded by organizing a rally and march to protest the University's association with a company that contributed to weapons used in war. A group of 100 protestors sought to disrupt the recruiting interviews taking place in West Hall. Police intervened violently, leading another group of protestors to voice their opposition at former President Fleming's office. 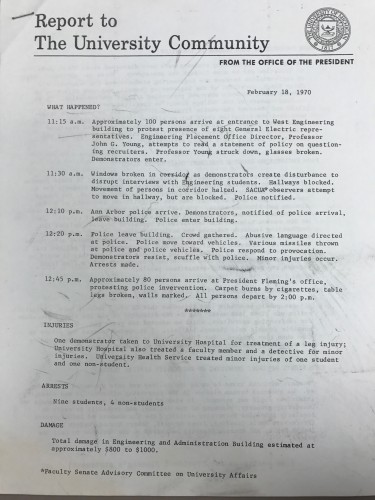 The Labadie Collection's Subject Vertical Files contain a "Report to the University Community" following the riot. The report largely focused on the monetary value of property damaged during the demonstration, and criticized the tactics of leftist students. Then-President Fleming wrote, “The radical left is unable to persuade people of the validity of its position. therefore it now resorts to force.”

The Ann Arbor District Library's Police Department Online History Exhibit offers some additional context about this event. It describes the extent to which police utilized violence, and adds additional detail in its retelling of the unrest. Bringing these sources together helps us understand more fully how stories of campus activism are told, whose voices are prioritized, and what rhetorical choices parallel responses to activism today.

In February of 2017, U-M engineering again became the site of student political organizing, this time in response to racist and antisemitic emails sent to students from someone spoofing a professor’s account. Students called upon President Schlissel directly to listen to their experiences and commit to tangible action. The Michigan Daily reported that one protestor said "My parents were here 30 years ago fighting for the same things..." Like in 1970, engineering students were primarily affected by the action being protested. Unlike in 1970, coverage of this event doesn't depict engineering and political activism as mutually exclusive.

As student groups continue to advocate for institutional accountability and meaningful responses to incidents like the aforementioned, library materials can more closely connect today's student movements to those of the past. The Bicentennial is an opportunity to reflect not only on the history of the university, but also on how the university has engaged with its surroundings over time. Using resources from Special Collections as well as from our neighbors on campus and in the Ann Arbor community can help us understand this history more fully. 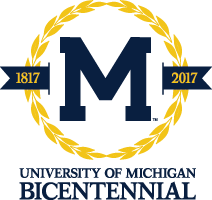