An old Jewish man in traditional dress stands in the middle of a street in Salonica, the famous Balkan port-city located on the shore of the Aegen Sea.

When was this photography taken? A clue in the picture helps us to establish an approximate year range: behind the old Jewish man, we can see a flag of Greece. In October 1912, the Ottoman authorities surrendered Salonica to the Greek Army in the context of the Balkan Wars (1912-1913).

The picture was, therefore, most likely taken after the Greeks captured Salonica and raised their national flag all around the city.

Since the production of Jewish postcards in Salonica practically ceased after the great fire of August 1917, it is safe to say that the picture of the old Jewish man was taken between 1912 and 1917.

Next to the Greek flag on the background there is another flag – this one has a stripe on the top side and, apparently, a Star of David in the center (the lower side of the flag is hidden behind the Greek flag). This may very likely be the flag known as the Flag of Zion, which was officially accepted as the Zionist flag at the Second Zionist Congress held in Switzerland in 1898, later becoming the official flag of the State of Israel after its fundation in 1948. It is possible, therefore, that the building we see on the background housed the headquarters of the Zionist movement in Salonica.

In fact, the Zionist movement gained traction in Salonica in 1907 with the arrival of Chief Rabbi Jacob Meir from Jerusalem. Following his arrival, the movement established a network of Zionist clubs, schools, and newspapers in the Balkan town (Mazower, 379). The movement gained additional traction in 1911, the year in which David Ben Gurion (1886–1973) landed in the Balkan town. His sojourn in Salonica as a Zionist leader, however, was not the most smooth, as several Jewish-Salonican social circles embraced a local Ottoman identity (and later a Greek national identity), opposing the creation of a Jewish State in the Land of Israel. Ben-Gurion resided in Salonica for a few months, but eventually moved to Istanbul to study Law. Later, in 1949, he was elected the first Prime Minister of the State of Israel.

On the back of the card the word "postcard" is printed in 7 languages, which indicates the broad scope of its potential audiences. Like the majority of the used Jewish historical postcards from Salonica available today, this one is inscribed in French. 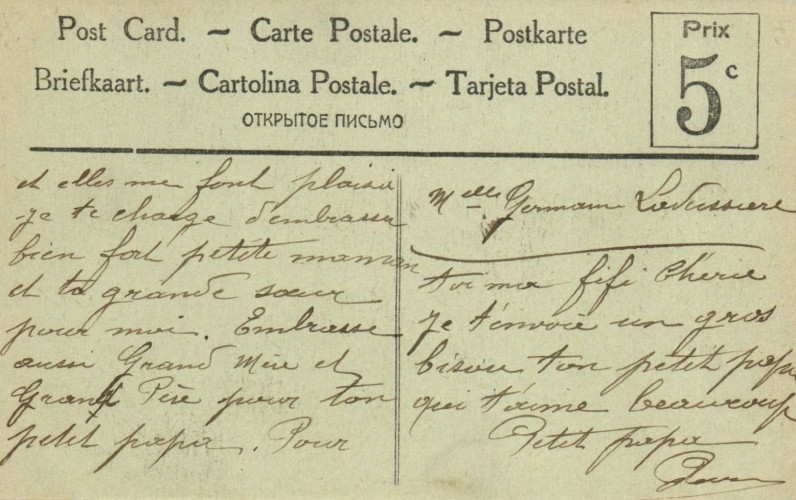 Chronakis, Paris Papamichos. "A national home in the diaspora?: Salonican Zionism and the making of a Greco-Jewish city", Journal of Levantine Studies 8,2 (2018) 59-84.