Viewers are invited to enjoy 19th and 20th century editions of Austen's novels,  explore Georgian England through the works of Austen's contemporaries, and learn how past and present generations of readers have responded to her unique narrative voice. A few highlights include the third American edition of Pride and Prejudice, published in Philadelphia by Carey & Hart in 1845, a 1767 edition of the the same Fordyce's Sermons that Mr. Collins attempts to read aloud to the Bennet sisters, and plates showing the landscaping work of Humphrey Repton, whom Maria Bertram's suitor, Mr. Rushton, wishes to hire to re-design the park at Sotherton Court in Mansfield Park.

Please join the student curators of Jane Austen 1817-2017: A Bicentennial Exhibit for a celebratory open house and light refreshments on Tuesday, April 18, 2017 from 1:00-2:30pm in the Hatcher Library Gallery. 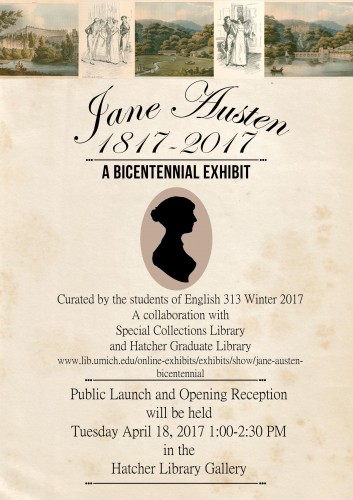