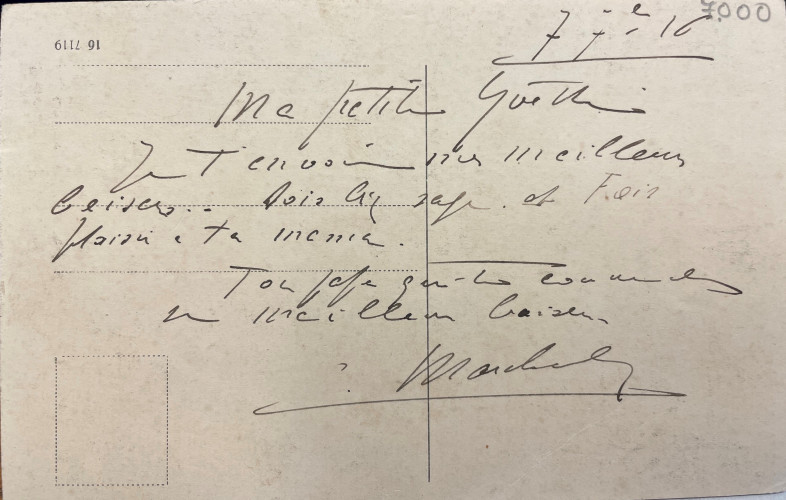 A gift of Constance Harris to the Jewish Heritage Collection, this postcard printed in 1916 approximately depicts an urban Jewish woman from Salonica (Thessaloniki), Greece, in a dress typical of the city’s late Ottoman period. In that time, the Sephardim (Jews or Spanish and Portuguese background) were the largest ethnic group in Salonica.

As indicated by one scholar, the most distinctive feature of married women’s costume in Jewish Salonica was a covering for the head, known as the kofya, which varied according to the personal taste of the wearer (Yannis Megas, 1993, 35). In the picture we also can see the woman wearing the typical apron, usually made of silk or cotton, known as devantal.

Salonica had been governed by the Ottoman empire from 1430 until the Greek army annexed the city in 1912 in the context of the so called “Balkan wars”. The transition to Western-oriented Greek culture in Salonica, now Thessaloniki, took a few years to happen, therefore it is not surprising to see a woman in old traditional dress, Turkish style, even a few years after the city had already been under Greek government.

In fact, it has been noticed that the Jewish women of Thessaloniki used to wear traditional clothes until the second decade of the 20th century. They were also considered the most elegant among the Jewish women of Greece and the Eastern Mediterranean (Christos Zafiris, 2017, 93-94). The development of the female costume of Salonican Jewish women has been the object of study of several scholars, among them Esther Juhasz (1990).

Despite the fact that there is no reference to the identity of the woman in the postcard, a distinguished collector identifies her as “Mrs. Salem in youth” (Costis Copsidas, 1992, 38).

A group of scholars studied this and other Jewish postcards from Salonica and explained that the woman's round, white, and fresh face – like a full moon – represented the beauty standards of her community (Tamar Alexander, Gila Hadar, and Shalom Sabar, "El oio ve, la alma desea: Jewish Postcards from Salonika", in Jerusalem Studies in Jewish Folklore 27 [2011], 204" [in Hebrew]).

Due to the cultural impact of the Alliance Israélite Universelle – a Paris-based international Jewish organization founded in 1860 – French was the language of prestige among Salonican Jews along with their daily vernacular Judeo-Spanish language, also known as Ladino, Judezmo, Spanyolit, and muestro espanyol. As of February 2022, the U-M Library holds over 400 items that include the Ladino language.

In any case, this and other similar postcards had not circulated exclusively among Jewish communities, as they were also approached as "ethnic postcards" and therefore were sent by non-Jews interested in the representation of Jewish types.