In celebration of Pi Day (March 14th or 3.14) we offer not one, not two, not three, not four, but five delightful desert recipes with a circumference of 2πr (2 times 3.14 times radius) from the Day Nursery Association's 1924 Cook Book from Richmond, Indiana.

Charity or community cookbooks typically consist of recipes contributed by the organization preparing the cookbook. In many such cases, encouraging wide participation from the authoring community was just as important as the ostensible fundraising goal. This leads to many cases of charity cookbooks offering multiple variations of the same recipe, often right next to each other. The Day Nursery Association outdoes itself by including five lemon pie recipes on the same page!

When browsing recipes, I am always curious how much (if at all) repeat recipes differ from one another.  Today, I took the opportunity to chart out the ingredients and directions for these five lemon pies to see whether they included subtle (or not so subtle) differences. The most obvious point of difference is that three of the recipes are for the kind of lemon pie we see most often today - lemon meringue: a thick lemon custard topped with whipped egg whites. The other two produce something I had never encountered before: lemon cake pie: lemon custard mixed with beaten egg whites before baking. Looking at modern-day recipes, such as this one from the blog One Hot Oven, it appears that the ingredients separate during baking, resulting in a pie that has a thick lemon custard on the bottom and a cake-like layer on top. 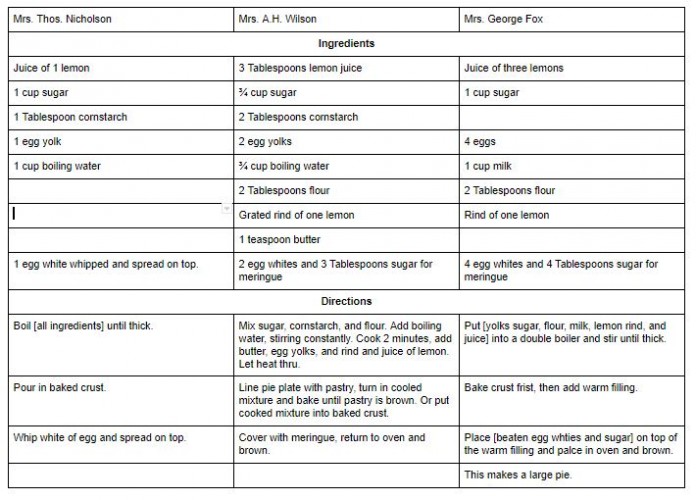 All three lemon meringue pies share the basic process of cooking a lemon-flavored custard on the stovetop, and then pouring it into a pie shell. Mrs. Thomas Nicholson and Mrs. A. H. Wilson's versions would taste very familiar to us today, using a custard prepared with sugar, cornstarch (and flour for Mrs. Wilson), egg yolk, and water. However, Mrs. Thomas Nicholson does not bake the meringue topping. Modern cooks skittish about salmonella might want to give this one a pass, or purchase pasteurized egg whites. Mrs. A.H. Wilson's recipe is a safer bet (she also provides more specific instructions Mrs. Nicholson) but she is curiously agnostic about whether to pre-bake the pastry. Modern advice comes down stongly on the side of pre-baking crust for lemon meringue pie, lest one end up with a wet, "weepy" custard filling.

Mrs. George Fox's recipe is very similar to Mrs. Wilson's (though she clearly calls for pre-baking the crust), with one major variation: using milk instead of water in the custard filling. I imagine this might produce something more like a lemon pudding pie, rather a typical lemon meringue, but it would surely be delicious. Mrs. Fox is also clearly accustomed to baking for a crowd, as her recipe calls for three lemons, instead of the single lemon used by all the other contributers.

Now for the lemon cake pies, in which an uncooked custard is combined with beaten eggwhites before baking: 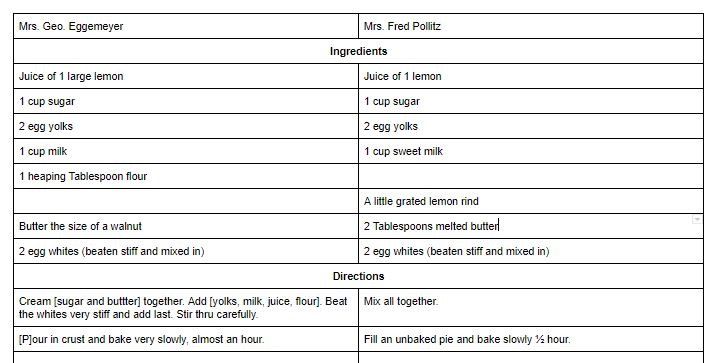 The two recipes for lemon cake pie are almost identical. The only difference in ingredients is that Mrs. George Eggemeyer calls for a little flour to help thicken the custard, while Mrs. Frex Pollitz adds a bit of lemon rind for extra zest. Mrs. Eggemeyer also cooks her pie much more slowly - twice as long as Mrs. Pollitz. Most modern recipes suggest around 45 minutes at 375 degrees, so perhaps a happy medium is the way to go if you decide to try out lemon cake pie for your Pi Day dessert.

Beat yolks of 4 eggs with 1 c. sugar, 2 T. flour. Rub this smooth with 1 c. milk. Add rind of 1 lemon, juice of 3 lemons, put into a double boiler and stir until thick. Bake crust first, then add warm filling and after you have beaten 4 whites of eggs and added 4 T. sugar to the beaten whites place on top of the warm filling and palce in oven and brown. This makes a large pie.