This month’s recipe is a lemon cake from Culinary gems: a Collection of Choice Recipes Gathered with Care From the Treasures of Culinary Experts, published in Westfield, Massachusetts in 1884. 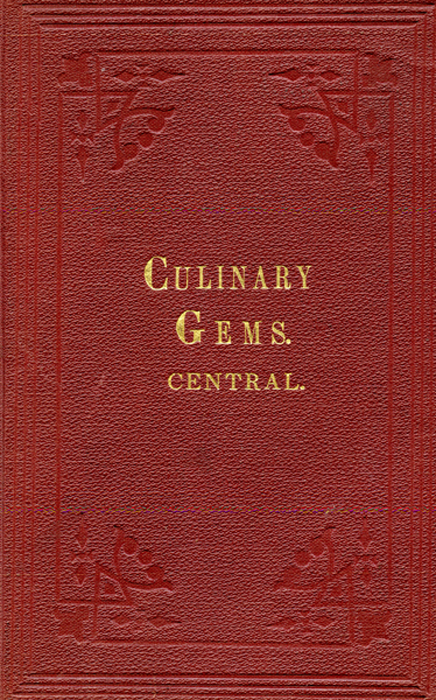 Although it is not clear from the text who the proceeds would have supported, the book has the structure of a charity cookbook, The recipes are contributed by members of a community and are attributed by name. The tone is not that of an expert informing the less accomplished, but rather of women who cook for their families daily offering a resource to their peers as a favor. The preface is quite explicit about who’s doing what, and for whom:

“THIS little book has been compiled for the purpose of putting in more desirable form valuable recipes which have been tested by persons of culinary skill and experience. Many of them have been extracted from private manuscripts, and contain the accumulated results of many successful trials. The names and initials annexed to the recipes are not intended to indicate, in all cases, the persons who originated them, but the sources from which they have been obtained, and the ladies who have tested their excellence; although in many instances the recipes are original.”

It’s clear that the book was lovingly put together: the typography of the title page is pretty spectacular

Also typical of charity cookbooks from the late 19th century (although not exclusive to them) is its enunciation (in language more or less high-flown) of women’s charge and mission in the world, which was to care for their homes and families.The preface is unequivocal about this:
“No woman should be considered well educated who does not know thoroughly the fundamental elements of housekeeping.”

Women were to consider themselves responsible for not just the physical well-being of those in their household, but for their moral health, and even their day-to-day equanimity and cheerfulness. Women were not to be discontented with their lot even though their sphere was circumscribed to home and family - the apparently menial work of cooking served a high and worthy purpose:
"We must have bread and meat. That is the most delightful home, in which nobody is fretted or worried by an untidy, an uncertain, or an ill-cooked meal. Man does not live, it is true, by bread alone ; but the lower ministers to the higher, and she is doubly accomplished who is not ashamed to give her mind to the well-being of her family, even to the providing them with something good to eat every day."

The social importance of feeding a family well is amply reinforced throughout the book. 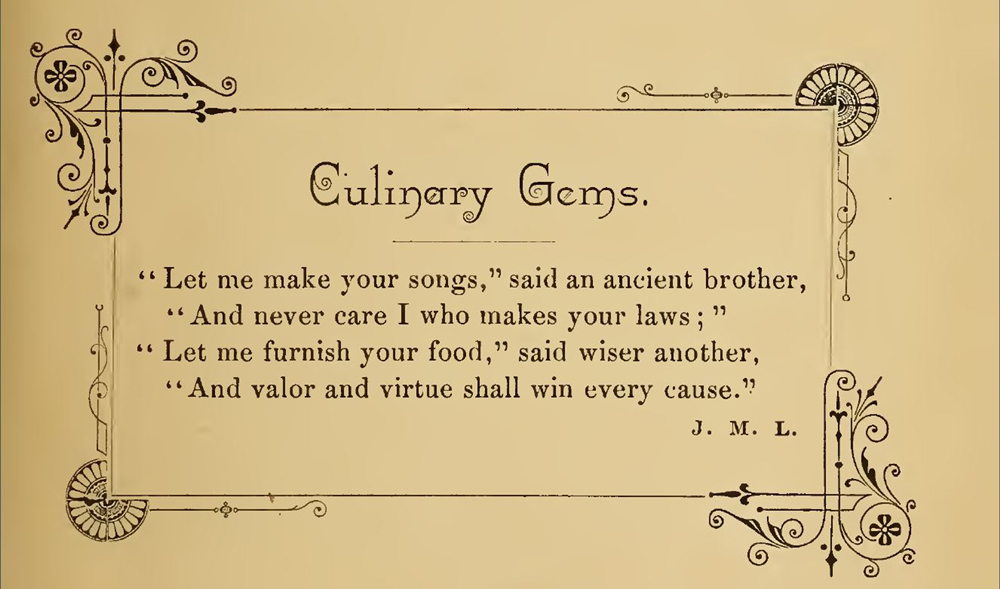 The practice of beginning chapters with quotes on household or gustatory matters, in rhyme, is also typical of charity cookbooks. While there is no rhymed epigraph for the chapter on Cake, a later page gives us this for Desserts.

Lemon was an extremely common flavor for desserts and pastries in the 19th century -- almost the default neutral flavor, the way vanilla is now. Although vanilla was known in Europe as a flavoring by the 16th century (there’s an article on Vanilla in Diderot’s Encyclopédie of 1765) and a commercial extract was available in the US from at least 1847, it overtook lemon in cakes and pies only slowly.

This relatively simple cake is versatile enough to serve multiple purposes. It does well as a shortcake with strawberries and whipped cream, or a slightly different take on Boston cream pie. It makes an appealingly delicate layer cake with a buttercream frosting (try lime or orange), a bittersweet chocolate glaze or ganache, or a vanilla-and-almond-inflected cream cheese frosting. It’s also wonderful for cupcakes with a simple lemon juice and powdered sugar glaze. While the rhubarb lasts, try serving it with rhubarb and ginger compote on the side.

Cream the butter and sugar until light and fluffy, beat in lemon zest
Beat in egg yolks, one at a time, until very light and fluffy
Beat in the milk and lemon juice
Beat the egg whites until they hold a stiff peak, and fold in
Fold in the flour just to combine
Bake at 350°in greased and floured pan(s):
9”x13” pan  35-40 min
2 9” layers ~30 minutes

Vanilla : travels in search of the luscious substance / Tim Ecott. 2004