Located between the Mediterranean Sea and the Balkan Peninsula, the port city of Salonica (Thessaloniki), Greece, is in the intersection of two different climatic zones – a geographic situation that creates high variations in atmospheric pressure during the year. In several occasions through the centuries, the strong winds that blow from the north down the Vardar valley whipped up fires that quickly spread, causing significant damage and devastation in the city.

The fire that sparked in Salonica on Saturday, August 18, 1917, however, was of unprecedent scale and changed completely the physiognomy of the city. The fire burned a large part of the historic city center, where several predominantly Jewish neighborhoods were located, leaving a large part of the city's population homeless – approximately 56,000 Jews, 15,000 Christians, and 10.000 Muslims had their houses consumed by the fire.

After the fire, a new urbanistic plan was implemented under the leadership of two famous architects, Ernest Hébrard of France and Thomas Mawson of England. The majority of the Jewish residents who lost their houses, now
impoverished, were transferred to peripheral areas of the town, such as the Regie Vardar and Campbell districts.

Dozens of postcards depicted the great fire of 1917, including the two featured here, which were purchased by the Special Collections Research Center with the generous support of the Lucius N. Littauer Foundation and the Solovy Judaica Book Fund.

The card featured above is not inscribed on the back and portrays the ruins of a Jewish district of Salonica after the tragic fire. On the left side of the image we can see the minaret of a mosque – an illustration to the fact that before the great fire of 1917 no district in Salonica was exclusively Jewish, Muslim, or Christian.

The card below – inscribed in French and dated June 27, 1919 – portrays the smoke and flames viewed from the port's custom-house (douane), and includes captions in English under the French captions. 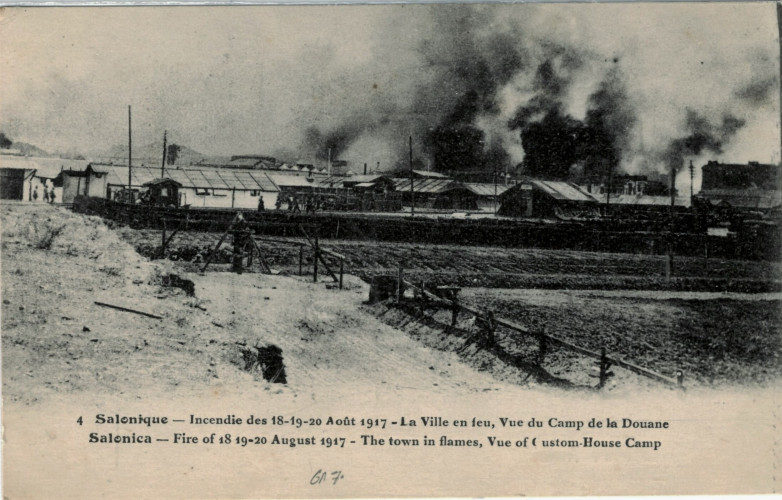