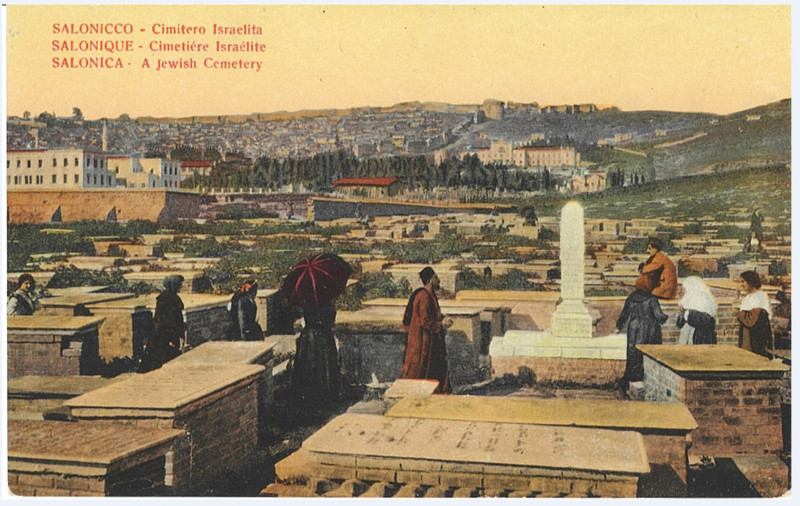 With more than 300,000 graves, the Jewish cemetery of Salonica (Thessaloniki, Greece) depicted in this postcard was one of the largest Jewish cemeteries in Europe. This cemetery was also an outstanding symbol of the centuries-old Jewish presence in the Balkan port-city and capital of the region known as Macedonia — grave stones that have survived are dated back to 1493.

Initially located in the periphery of Salonica, the Jewish cemetery eventually became a central area as the city expanded eastward. After the Great Fire of 1917, new urbanistic plans proposed the expropriation or transfer of the cemetery. In the 1930s, parts of the Jewish necropolis were given to the University of Thessaloniki.

Salonica was occupied by the German army in April 1941. The systematic destruction of the cemetery started a year later and was completed in 1943 — just a few weeks before the nearly 56,000 Jews of Salonica were confined into ghettos next to the central train station and subsequently sent to extermination camps in Poland. Desecrated tombstones from the Jewish cemetery were used for construction and can be found today in buildings, sidewalks, and other places around Salonica.

Produced in approximately 1917 with captions in Italian, French, and English, the postcard apparently depicts a funeral ceremony, with a rabbi and relatives of the deceased among the tombs. As indicated on the back of the card, it was printed in Italy. All we know about the editor is their initials: B. R. D.

Saltiel, Leon. "Dehumanizing the Dead: The Destruction of Thessaloniki’s Jewish Cemetery in the Light of New Sources", Yad Vashem Studies 42/1 (2014), 1-35.