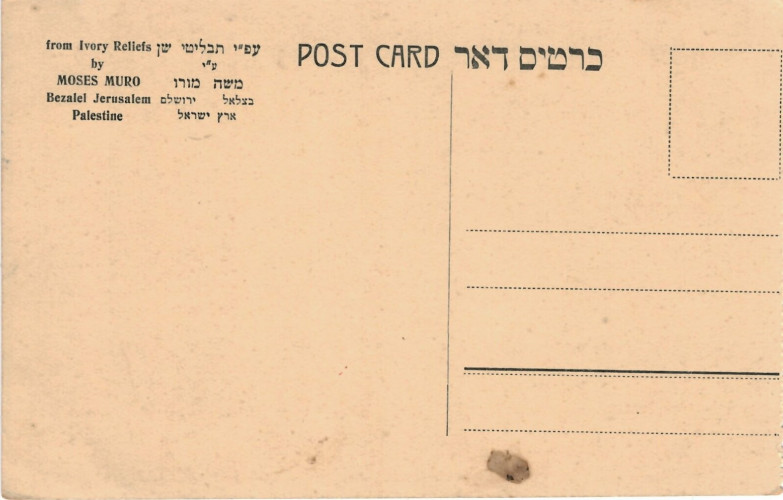 This recently acquired historical postcard was purchased with the support of the Thal Judaica Trust Fund and is part of our new Jewish Salonica Postcard Collection.

Epithets such as “Jerusalem of the Balkan”, “Madre de Israel”, and “Jewish republic” indicated the prominence and splendor of Salonica (Thessaloniki, Greece) as a Jewish city par excellence.

In fact, its nearly 100,000 Jewish residents at the beginning of the 20th Century, as well as its diverse Jewish institutions, placed Salonica as the metropolis of Sephardic (Jewish of Iberian background) culture in the Eastern Mediterranean.

From the beginning of the 16th century until the 1920s, Sephardic Jews had been the biggest ethnic group in Salonica – a strategic port city ruled by the Ottoman Empire from 1430 until 1912.

Author of the ivory relief featured in the postcard, Moses Muro (Minsk, 1888–Jerusalem, 1957) was one of the several artists associated with the Bezalel School art movement – a movement that emerged in Jerusalem in the early 20th century aiming to create an authentic Jewish national art in the Land of Israel (see Dalia Manor, 2005).

The U-M Library Special Collections Research Center holds dozens of items by Bezalel School artists – the majority of them are part of our Jewish Heritage Collection.