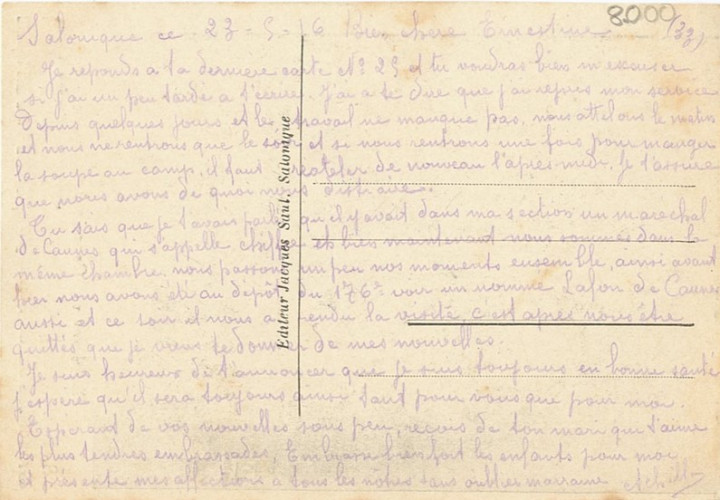 A gift of Constance Harris to the Jewish Heritage Collection, this black and white postcard depicts none other than Rabbi Jacob Meir (1856–1939), a Jerusalemite rabbi who in 1906 was named Haham Bashi of Jerusalem – Haham Bashi is a Turkish term equivalent to Chief Rabbi.

Besides being named Haham Bashi of Jerusalem, Jacob Meir also served as the Chief Rabbi of Salonica (Thessaloniki, Greece) between 1908 and 1919 – a turbulent period for the Balkan port city.

After having been governed by the Ottoman Empire for nearly five centuries, Salonica surrended to the Greek Army in 1912 in the context of the Balkan wars and in 1917 it became a strategic location in the World War I theater.

Jacob Meir returned to Jerusalem in 1919 and two year later was elected the Sephardi Chief Rabbi of Palestine, a position he held until his death in 1939.

Published by editor Jacques Saul with captions in Greek, French, and Judeo-Spanish (Ladino), the postcard is inscribed in French and dated May 26, 1916.