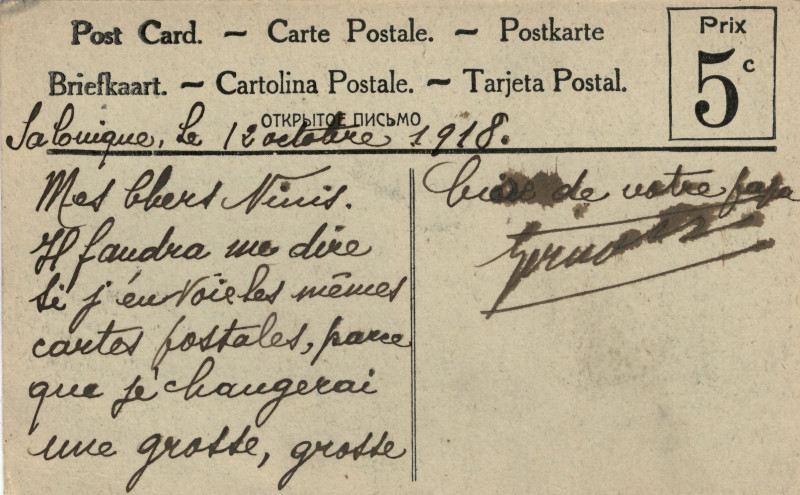 Among the hundreds of Jewish postcards from Thessaloniki (Salonica), Greece, produced between 1886 and 1917, just a few depicted synagogues – usually the outside structure of synagogue buildings. This recently acquired postcard, however, is an exception to that rule. It displays the interior of the Italian synagogue, one of the oldest synagogues in the famous Balkan port city.

This synagogue was richly decorated. On the left foreground we see part of the elevated marble platform where the Torah scroll was read. Two posing Jewish old men are sitting on its stairs. On the background there is a majestic wood ark, located in the East wall, so that when members of the community turn in its direction for praying, they turn towards Jerusalem.

On the back of the card we see the word "postcard" printed in 7 languages. It indicates the broad scope of its potential audiences. In fact, after Greece entered the First World War in June 1917, Allied armies fighting on the Macedonian front stationed in Thessaloniki. Thousands of soldiers from different countries spend months in the strategic port city and were avid consumers of postcards, as they had to communicate with their families and friends, which anxiously waited from news back home.

Like the majority of the used Jewish historical postcards from Salonica available today, this one, dated October 12, 1918 (just two weeks after the Armistice of Salonica was signed) is inscribed in French – in this case in a neat caligraphy.