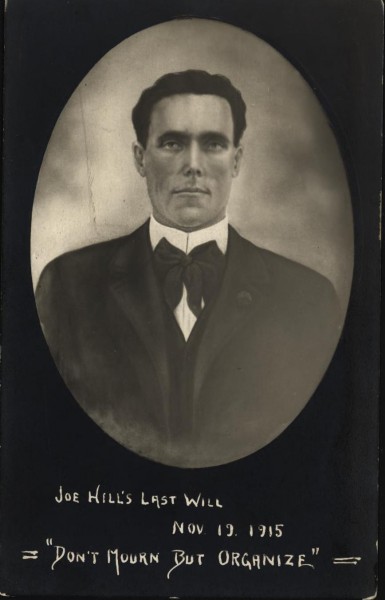 People who have never heard of the Industrial Workers of the World (IWW) are likely to have heard of its most famous member, Joe Hill, also known as Joseph Hillström. Born Joel Emmanuel Hägglund in Sweden, he was a maritime worker who immigrated to the U.S. in 1902. In 1905 he joined the newly formed IWW, and like many “Wobblies” of that time he was an itinerant worker, traveling by boxcar around the country and working in cities in both the east and the west. He was also a successful IWW organizer and well known to the authorities. In 1914 a Salt Lake City grocer named John G. Morrison and his son were murdered in their shop. The same night, Joe Hill knocked on the door of a Salt Lake City doctor with a bullet wound. Circumstantial evidence and Hill’s refusal to give an alibi caused him to be charged with the murders of the Morrisons. Despite his claim of innocence and the lack of witnesses, he was convicted and sentenced to death. Many believed that he did not receive a fair trial, and numerous appeals were made on his behalf to the Governor of Utah, ranging from President Wilson and the Prime Minister of Sweden to thousands of other people who sent letters and telegrams of protest. Nevertheless, he was executed by a firing squad on November 19, 1915. His last words to Big Bill Haywood were, “Don’t mourn for me, organize!” He became a martyr for the cause of labor and although little is known about his life prior to his arrest, many books have been written about the case. Commemorations have taken place all over the world to mark this 100th anniversary.

One of Hill’s final requests was not to be “caught dead” in Utah, so his body was shipped to Chicago where 30,000 people attended his funeral. He was cremated and his ashes divided among all the IWW locals, to be scattered “where some flowers grow.” An envelope which once held some of Hill’s ashes was donated to the Labadie Collection by Toledo IWW member George Carey in the 1940s.

The poem, "I Dreamed I Saw Joe Hill Last Night," written by Alfred Hayes in 1925 and set to music in 1936 by Earl Robinson, has been performed and recorded by scores of musicians and translated into 15 languages; it is still sung by workers throughout the world.

Hill wrote popular songs that are still sung today, such as Casey Jones-The Union Scab. With other Wobblies, he began the practice of singing irreverent songs that ridicule those who hold power in society. He coined the term “pie in the sky” in his song, The Preacher and the Slave, (sung to the tune of In the Sweet Bye and Bye) which ridiculed the Salvation Army (referred to by Wobblies as the “Starvation Army”) preachers who enticed down-and-outers to the mission with a meal:

Long-haired preachers come out every night,

Try to tell you what’s wrong and what’s right;

But when asked how ‘bout something to eat

They will answer with voices so sweet:

You will eat, bye and bye

In that glorious land above the sky;

You’ll get pie in the sky when you die.