The term ‘pop-up book’ was not coined until the 1930s, but pop-up books were quickly embraced by publishers, paper engineers, book artists and the general public. In this last post of the series, I will talk about a challenging treatment of a 1930s’ pop-up book, Blinky Bill.

This book contains three pop-ups. The first pop-up (pop-up #1) is built upon a parallelogram and uses a “moving arms” mechanism.

The second pop-up (pop-up #2) uses a parallel-fold structure with decorative parts cut away. 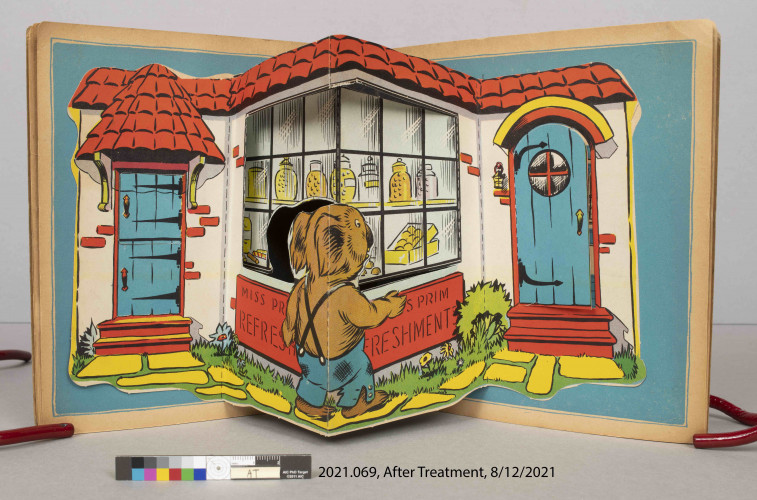 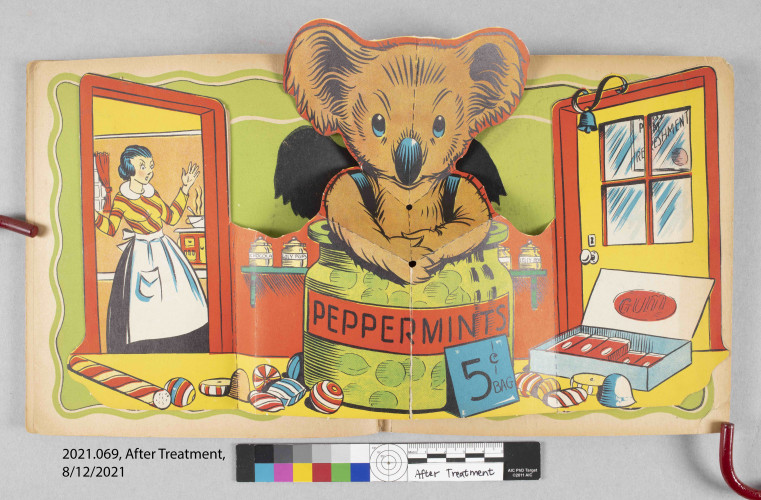 The before treatment video shows that the leaping koala in pop-up #1 was not fully popping, leaving his face hidden. This was caused by a crudely executed repair of the cover boards that restricted the book from opening fully.

The old repair restricted the movement of the spine, which caused the pages to pivot along the edge of the repair cloth, instead of the spine.

The old repair also caused the back cover to split along the edge of the repair cloth.

The key to restoring the moving elements was to remove the badly repaired spine and to reconstruct the binding. A new spine piece needed to be created for the latter. Conservators sometimes make mock-ups before the actual treatment to test out the result. Factors such as size, thickness, and rigidity of the original materials are replicated in the mock-up, since they all contribute to the function of the book. To make sure that our design of the new spine piece would work, we made a mock-up of the book where the exact shapes and positions of the pop-ups were replicated.

For the new spine piece, a high-quality binders board (Eterno board), chosen for its strength and flexibility, was pared down to an appropriate thinness. It was lined with Japanese paper toned to a color similar to the textblock paper. The new spine piece was sewn on with the textblock and tucked underneath the original decorative facing paper of the boards.

The success of the mock-up made us confident to proceed. The book, which was a single signature bound with staples, was first taken apart. This made it easier to access and repair the covers and the movable elements.  Some areas of pop-up #1 had also been improperly repaired, so these old repairs were removed with a heated spatula.

With the binding structure rebuilt and functioning properly, it was time to reattach the right glueing tab of pop-up #1. When making a pop-up, after one glueing tab is adhered, you should let the other find its own spot by folding the pop-up piece into its closed position and then closing the book. This is much more accurate than any mathematical calculations of distance or angles, and this is how the pop-up was reattached in this treatment.

The last steps of this treatment were cosmetic. The new spine piece was covered with toned Japanese paper (see A below). The decorative paper salvaged from removing the repair cloth was put back (see B below). Finally, I retouched some losses with watercolor (see C below).

Pop-ups #2 and #3 only required some minor repairs. After those were done, Blinky Bill was again fully functional!

Tackling three books with different movable structures and damage, and making them functional and safe to handle was a fun and rewarding experience for me. I am excited that future users can now actually interact with these books again. There is still a lot yet to be explored in the world of pop-up and movable books in the William A. Gosling Pop-up and Movable Book Collection at U-M Library!