In this second post of the series, I will describe the treatment of another movable book, which contains a variety of movable and interactive elements such as pull-tabs, a rotating wheel, and disappearing images.

For the pull-tabs and the rotating wheels, the mechanisms are sandwiched between two pages. The pull-tab mechanism in this book also consists of a pull-strip and a slat with a printed image that shows behind the cut-out windows in the top sheet. Instead of being laced through slits (as was seen in The Animated Alphabet), the strip is laced through one or two loops attached to the base sheet. Before treatment, the pull-tab mechanisms failed because the loops were missing or detached.

The top loop was cut open to release the pull-strip in order to remove the old repairs and reinforce the strip. 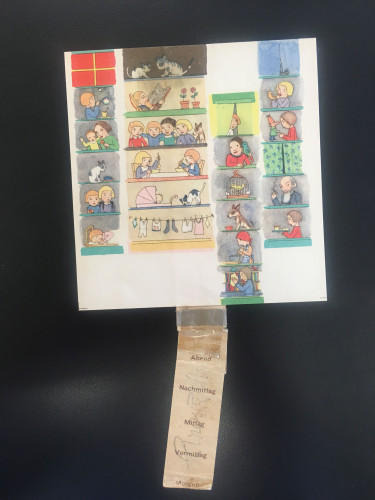 Like the pull-tabs on The Animated Alphabet, these pull-tabs were worn and damaged from use and had been previously repaired with tapes. The repairs were crudely executed and the tape adhesive was staining the paper.  I removed the adhesive embedded in the paper using a suction platen and organic solvents.  This reduced some of the stains and prevented  further staining.

The opening at the bottom edge was very restricted. I used a long surgical tool with a small grabbing end called a valve scissor to feed the pull-strip back in place, re-join the detached loop, and adhere a new loop onto the base sheet.

In the last movable element, Crosses Theater, one of the pull-strips had fallen out because a loop was missing (see image below). Fortunately, this time, I could work through the cut-out window and not separate the sheet as I had previously.

I made a new loop with a medium thick, smooth paper. The smoothness minimizes friction while the proper thickness ensures that the other pull-strip (that operates a red curtain) could glide over them smoothly.

Now, both the first and last movable elements in this book function smoothly.

I have so far covered the conservation of two movable books. Next blog, the last of this series, will describe the treatment of a 20th-century pop-up book, so “pop” in if you are interested!