The class, German 386 / Fairy Tales, is devoted primarily to the tales collected by the Brothers Grimm just over 200 years ago, while also exploring the structural elements of fairy tales and the stories’ ongoing influence in contemporary society. Mary Gell brought her class of 32 students to the Special Collections Library in June to give students a sense of the role illustrations have played in the reception and popularization of fairy tales.

In total, we set up eight tables with four items each, spread out across two rooms (our Teaching Space and what is normally our Quiet Study area). One room held our older materials - generally 19th century to early 20th century. The other room held all later materials, including some from Gell's personal collection and some items from the Shapiro Undergraduate Library, which houses a circulating children’s literature collection.

At the beginning of the workshop, I, in my role as a University Library Associate, gave a brief introduction, talking generally about the Special Collections Library, some history on the illustrators highlighted that day, and basic handling tips. Then, the students broke up into pairs and were further divided into two groups, one group per room. Each student pair stationed themselves at a table for about 15 minutes before moving on to another table. They had to answer questions given to them by the teacher beforehand. These questions directed the students to think about the books’ intended audience and how illustrations of the same tale can dramatically differ from one artist to another. 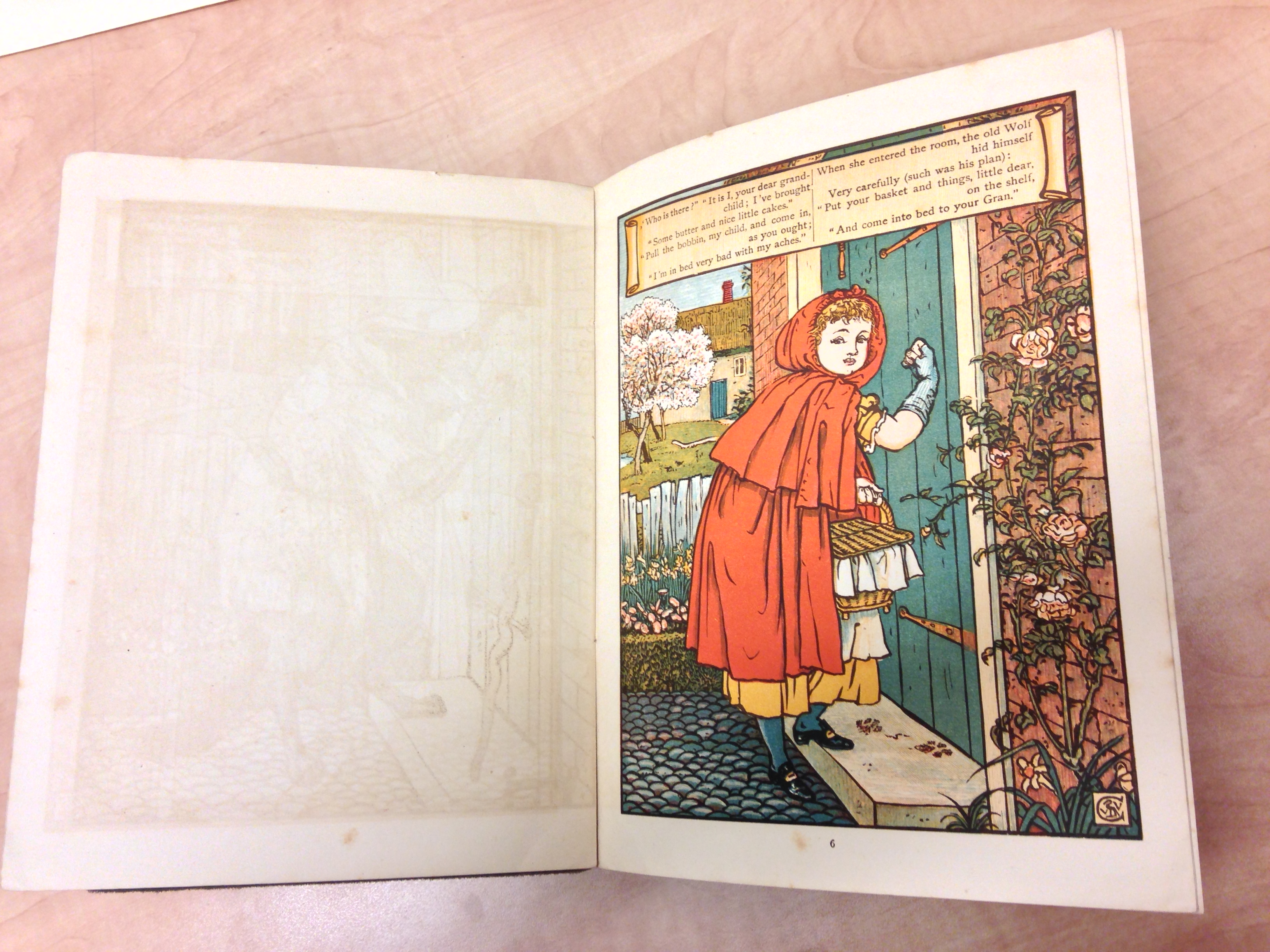 Students were impressed by this book in all of its full-page color glory. They also began to see the book as an artifact - not just a vehicle for text - many asking about the reason that the pages were only printed on one side. 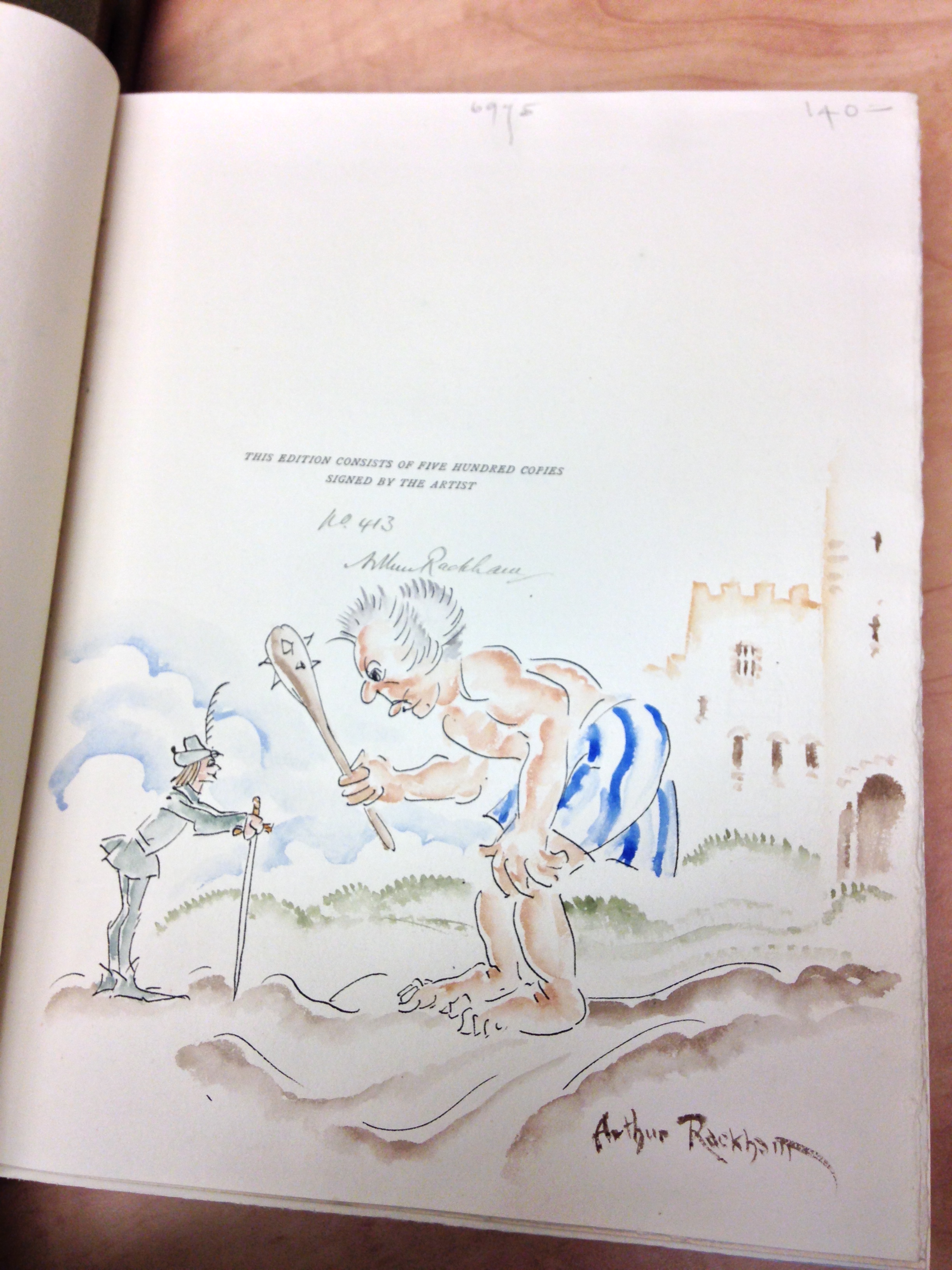 The Chalat Family Arthur Rackham Collection is one of the highlights of our children’s literature holdings. The book above was one of the many special editions that Rackham published during his lifetime, with vellum binding, his signature, and an original color drawing of Jack and the giant. We showcased this book as an example, not just of our Rackham collection, but also of the popularity of these deluxe editions and the stories that different pieces of the book can tell. 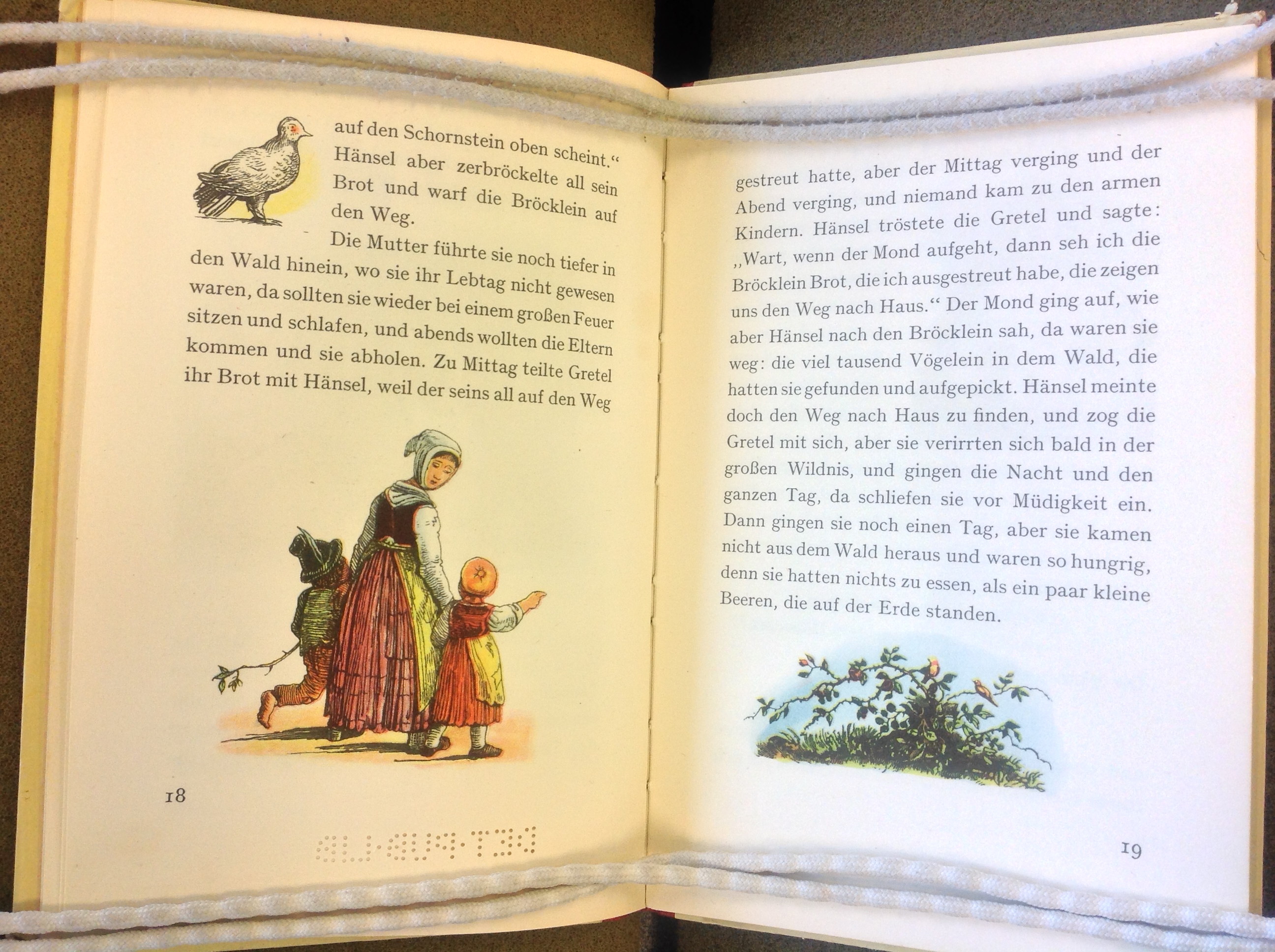 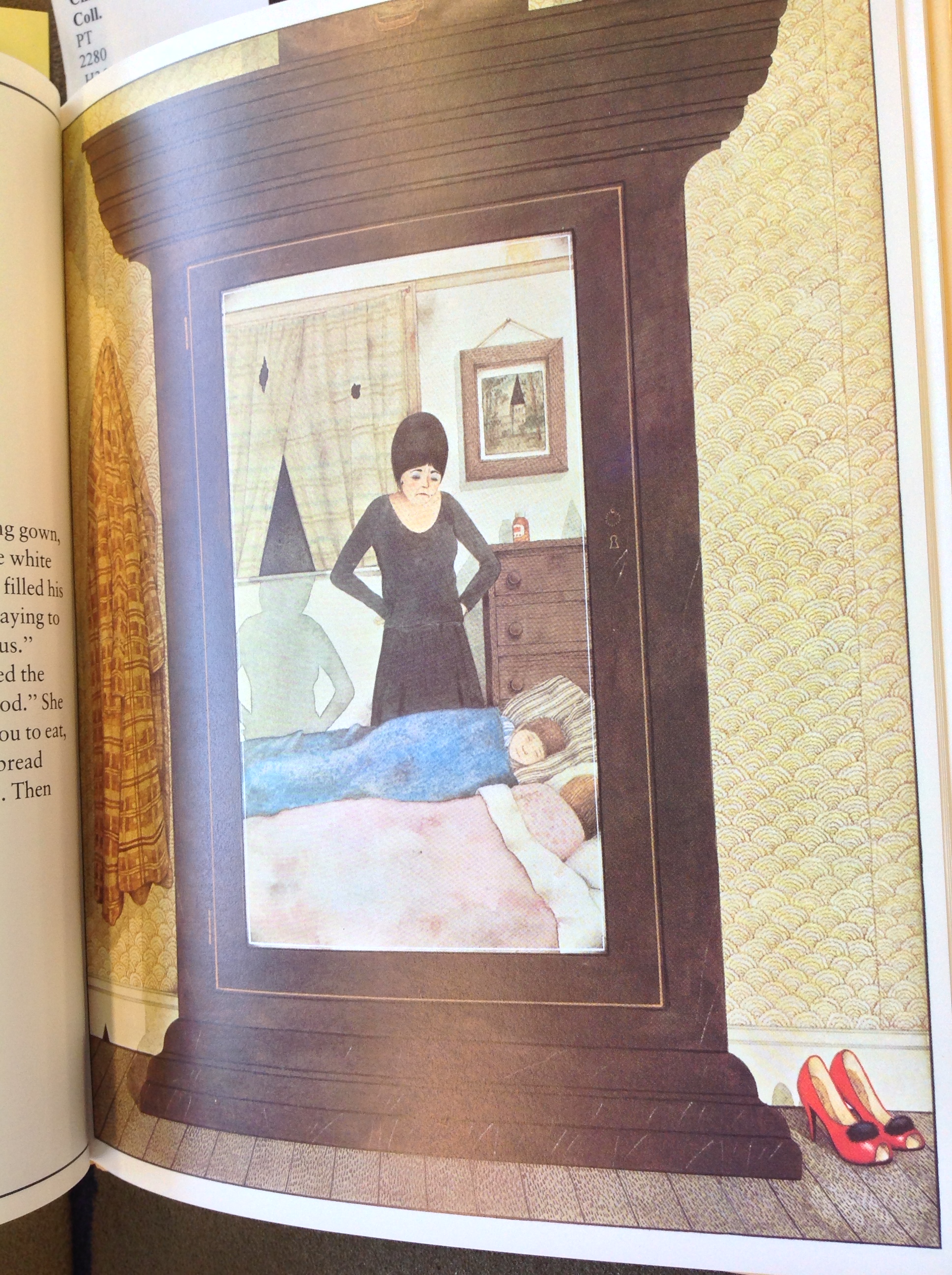 Students had the chance to explore how pictorial interpretations of the tales vary significantly from one century to the next and how the illustrations reveal society’s changing views of childhood. In older illustrations, such as in Franz von Pocci's (originally from the 19th century), the parents seem loving and blameless. Anthony Browne's illustrations, however, clearly place guilt with the stepmother of Hänsel and Gretel. Note, above, the shadow of the mother and the crack between the curtains, which make it seem as though the mother's shadow is topped by a witch’s hat. 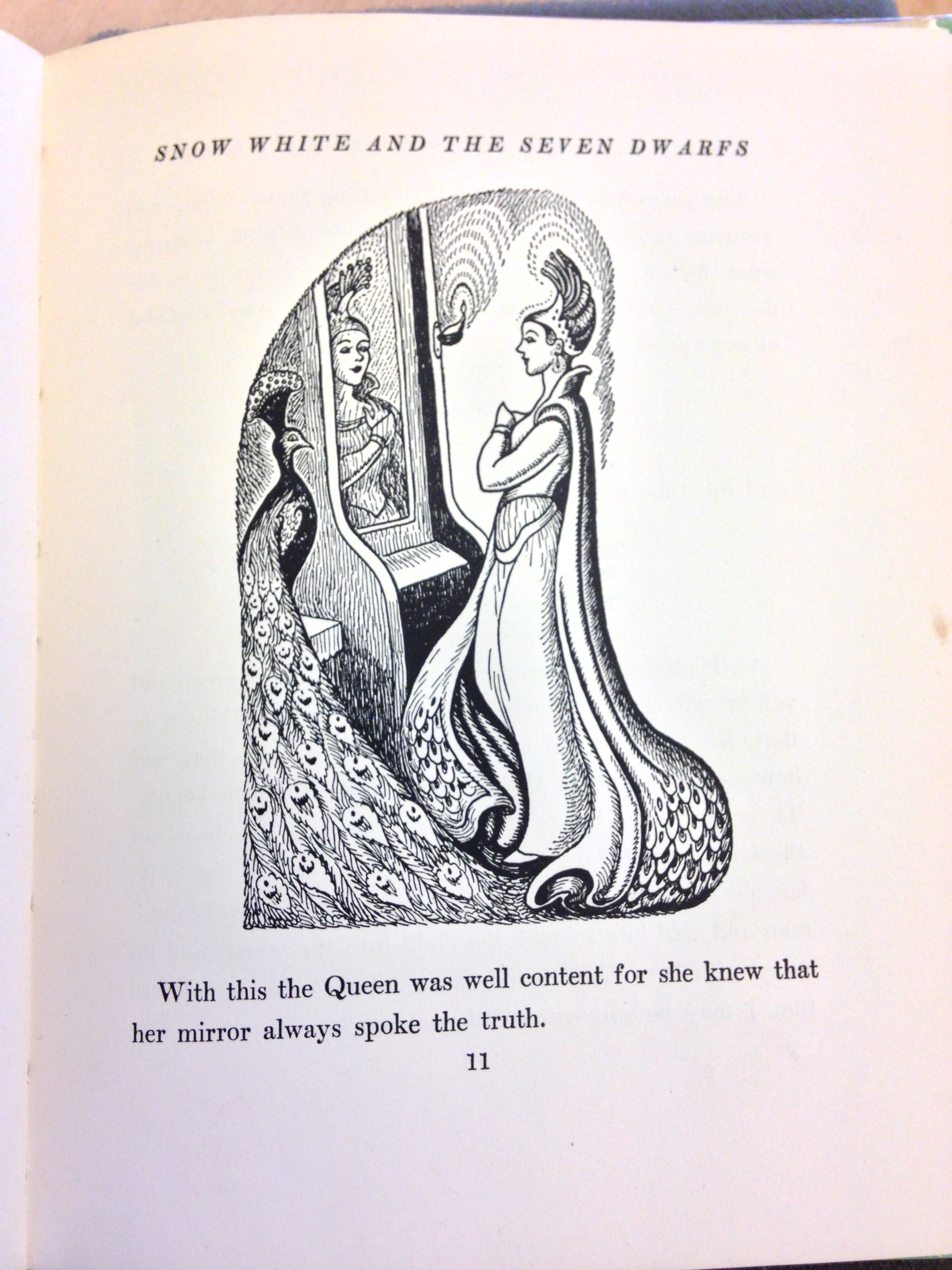 As mentioned previously, part of my introduction included familiarizing students with the resources in the Special Collections Library. One particularly important collection of children’s literature is the Lee Walp Family Juvenile Book Collection. The Walp Collection includes picture books from the 20th century and Caldecott and Newberry award winners, such as Wanda Gag’s Snow White and the the Seven Dwarfs, pictured above.

“I knew the event was a success when I saw how thoroughly engaged the students were throughout the session, as they discussed the illustrations with their partners and asked numerous questions of the librarians at hand.  Many students were so enthused that they wanted to show me the photographs of stunning illustrations they were able to take with their phones and other devices.”

In student evaluations of the event, many spoke of the benefit of handling the books themselves and seeing the items in person. Here are a few highlights:

“The pictures/illustrations were even better in person!”

“I found actually having contact with the real books increased my excitement.”

The most useful part of the session was “that I could see the images in question in the context of other images and stories in the book, as well as the book itself.”

The students seemed to have an increased awareness and appreciation of the illustrations, the stories, the books, and the history surrounding all. I know I certainly did after preparing for and taking part in this class! 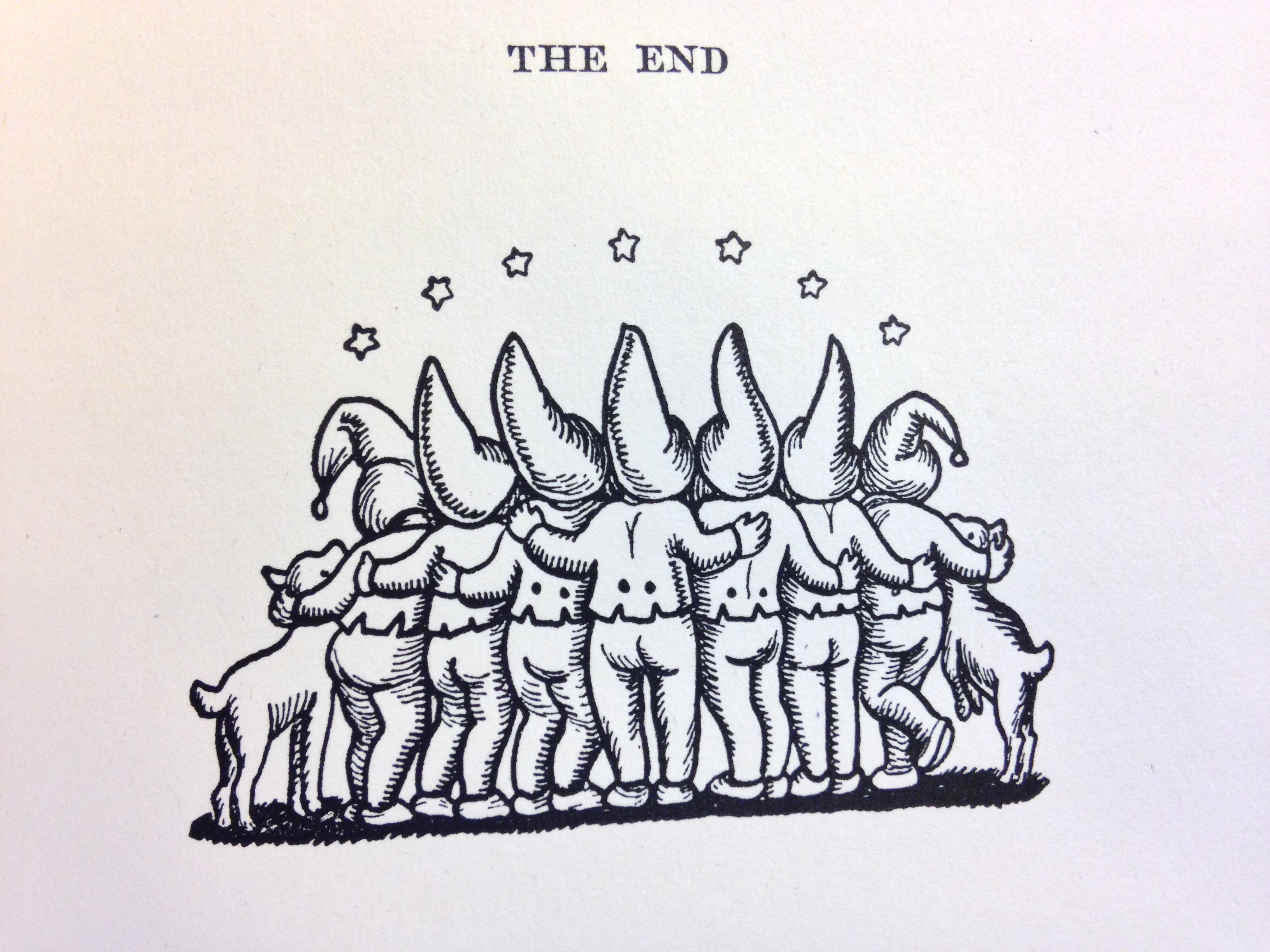 Thanks to Mary Gell for her contributions to this post.