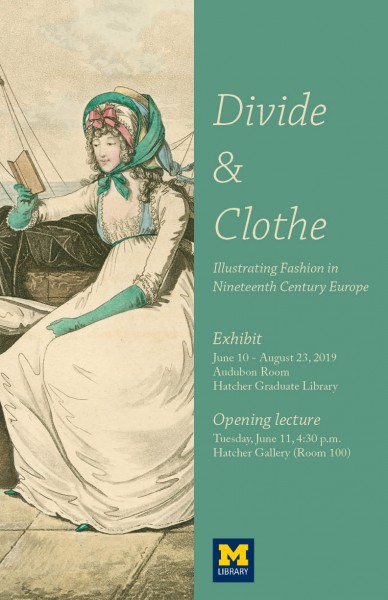 The Special Collections Research Center is pleased to announce the opening of a new exhibit, Divide & Clothe:  Illustrating Fashion in Nineteenth-Century Europe. The exhibit was curated by Isabelle Gillet and Courtney Wilder, two PhD candidates in History of Art. Please join us at 4:30pm on Tuesday, June 11 for a lecture and reception in the Hatcher Gallery. After Gillet and Wilder's lecture, there will be time for questions and browsing. Light refreshments will be provided.

Divide & Clothe explores a dramatic surge in images of clothing that appeared in European books, journals, and prints from the 1780s through the 1870s. These images contributed to and reflected shifting ideas about the interrelationship between clothing and identity. It was in this period that "fashion" became the core concept defining clothing choice for Europeans. As a dedicated fashion press emerged by 1800, so did expectations about fashion: trends now dictated the pace at which clothing should be updated.

But the early nineteenth century also witnessed a rise in interest in clothing that did not change, and which became subsumed in the category of "costume." The period's prolific illustrated press documented traditional costumes worn in rural regions of Europe or far-flung parts of the world. Such images contributed to perceived divisions between those who participated in fashion and those who did not. In so doing, these images complemented contemporary beliefs that progress and modernity were inherently metropolitan, Western phenomena. The exhibit traces these contrasting ideas about clothing as fashion and as costume (as well as hybrids of the two) across visual representations ranging from fashion plates to caricatures, and from journals associated with clothing production, to encyclopedic volumes on historic dress and world costume.

The exhibit will remain on view in the Audubon Room through August 23.