Posts tagged "events"
from Beyond the Reading Room

Exhibit Opening | Animals in Rhyme: The Friends of Mother Goose 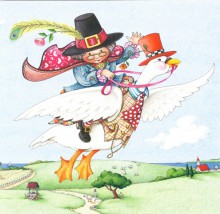 On display at the AADL Downtown Library in the Lower Level Display cases from December 2, 2015-January 15, 2016, this exhibit invites visitors to explore a wealth of illustrated animal rhymes from the Special Collections Library. Join members of the Ann Arbor Storytellers Guild from 1-2pm on Saturday, December 5, 2015 in the AADL Multipurpose Room for animal stories for the Pre-K and early elementary crowd.

Join us to celebrate 150 years of Alice illustration on Monday, September 21 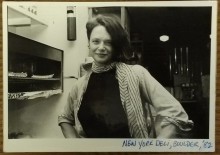 In culmination of this year’s Poetry at Literati series, Anne Waldman, whose papers are part of the U-M Special Collections Library, will be performing tonight with fellow poet Anne Carson at 7:30pm at Ann Arbor’s Literati Bookstore (124 E. Washington). Anne Waldman is renowned for her dynamic poetry performances, which are intended "to conjure states of mind and possibilities, and to wake people up to poetry as an active condition. As an experience in and of itself."

Speaking the End Times at the Special Collections Library 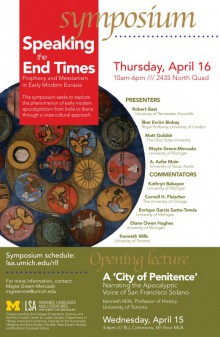 On April 16 my colleague Evyn Kropf and I prepared a show & tell presentation of manuscripts and early printed books for the attendees of the symposium, "Speaking the End Times: Prophecy and Messianism in Early Modern Eurasia". In brief, this two-day conference explored the topic of early modern apocalypticism from India to Iberia. 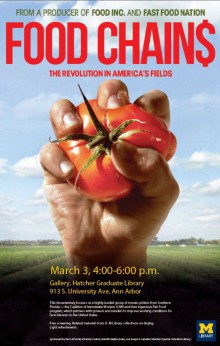