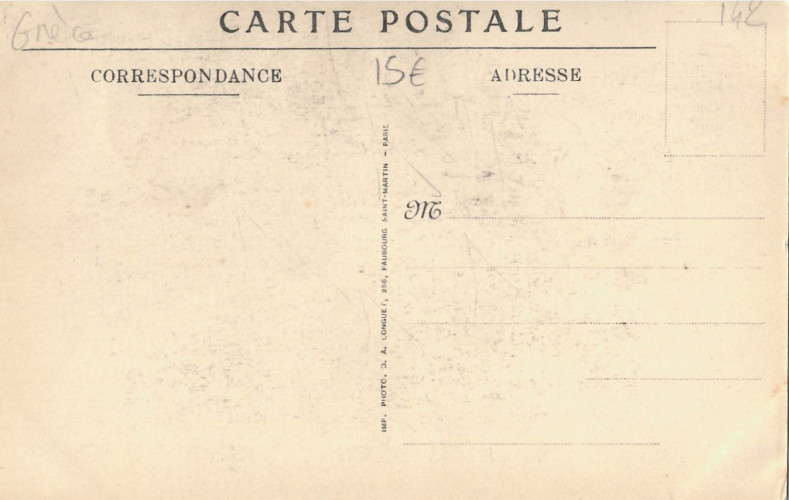 The rare postcard was published by editor Albert Barzilai from Salonica around 1917 and is featured in several reference works, including Costis Copsidas’ The Jews of Thessaloniki Through the Postcards 1886-1917 (1992) and Yannis Megas’ Souvenir: Images of the Jewish Community of Salonika 1897-1917 (1993). We learn from Megas (page 41) that this same picture was first published in Salonica by another editor, G. Bader.

In fact, several Jewish editors of postcards had been active in Salonica from around 1880 until 1917 – Copsidas lists at least 30 of them. It is worth noting that these editors were interested in diverse topics and did not limit themselves necessarily to Jewish motifs.

The inscription on the lower left side of the card indicates that Barzilai’s place was located on the “Quartier franc” – a historical neighborhood close to the port of the city where merchants from France and other Western European countries used to live. Barzilai was not the only publisher at the Quartier franc as at least one more editor, David M. Assael, also established a studio there.

The tragic great fire of August 18, 1917 burned a considerable portion of Salonica, leaving about 50,000 Jewish residents in poverty and putting an end to a sort of Jewish golden-age in the Balkan port city.

The inscription on the back of the card informs us that it was printed at Faubourg Saint-Martin in Paris, which indicates that at some point – perhaps after the great fire of 1917 – Jewish postcards from Salonica started to be printed mainly at the French capital.