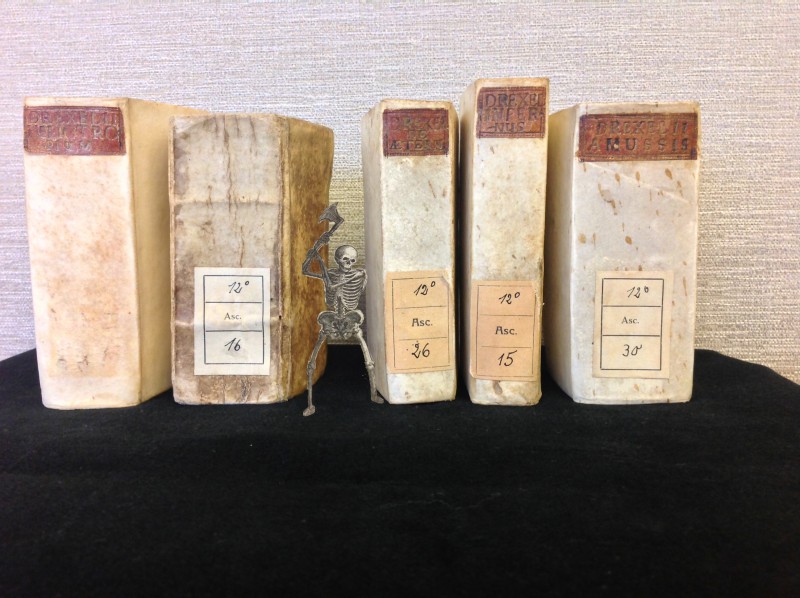 Recently, and in a single purchase, the Special Collection Library acquired five rare miniature books (the largest of them being only ten centimeters and a half tall) which contain religious treatises by the Jesuit preacher and author, Jeremias Drexel (1581-1638).  These five titles are an extraordinary addition to our growing collection of religious publications following the protestant reformation of the sixteenth century.

Raised in a Lutheran household, Drexel converted to Catholicism and studied philosophy and theology in Ingolstadt. In 1598, he entered the Jesuit order, becoming a priest in 1610. Appointed as a court preacher to Duke Maximiliam I of Bavaria in 1615, in the succeeding years he became one of the most popular devotional writers of his age. His printed works were based on the sermons he had delivered at the court of Maximilian. Originally composed and published in Latin, these new versions were quickly translated into many vernacular languages, and read by Protestants and Catholics alike.

The small size of these volumes suggests that their former owners carried them, read them, and probably hid them, anywhere they wished. While these volumes look like prayer books, they belong to a very different genre. In the tradition of the emblem book, in which readers were expected to decode a carefully crafted combination of image and text, Drexel's works were designed to inspire both fear and comfort.

Specifically, these five titles deal with various theological topics that might have resonated in the hearts of their readers:  the subjection of human freedom to the will of God (Heliotropium, seu, conformatio humanae voluntatis cum divina libris quinque. Munich: Nicolaus Henricus, 1629); a gloomy description of the different types of punishments available in hell (Infernus damnatorum carcer et rogus aeternitatis. Pars II. Cologne: Jo. Wilhel. Friessem, 1674); the rightness of human intentions (Recta intentio omnium humanarum actionum amussis. Munich: 1636); the afterlife (De aeternitate considerationes. Munich: Cornely Leysser, 1632); and, of course, the most popular theme of all:  death (Aeternitatis prodromus, mortis nuntius quem sanis, aegrotis, moribundis sistit. Munich: Cornelius Leysserius, 1628). In brief, Drexel managed to popularize the main precepts of the Catholic faith. And judging by the number of reprints, editions, and translations of his sermons, Mr. Drexel was a bestseller in the second half of the seventeenth century!