Welcome to the new year, everyone. We've tallied up the list of most popular games in the archive during 2015, and posted them below. We have the usual list of sports games and first-person shooters, but were also happy to see the new Smash on the list, as well as Mario Kart. Which games do you think will be the most popular for 2016?

"Nothing Wasted" Book Display for January 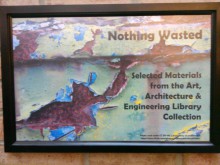 This month, we created a book display called "Nothing Wasted," which focuses on junk art and the topic of recycling. Here are a few images to get you started. Feel free to check it out next time you're on the 2nd floor of the Duderstadt Center.

On Printing a Shakespeare's Quarto at the Wolverine Press 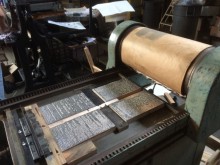 As part of the upcoming exhibit "Shakespeare on Page and Stage: A Celebration" (Audubon Room, January 11- April 27) we decided to include a facsimile version of a quarto gathering based on a real seventeenth-century quarto edition of a play held at the Special Collections Library: The tempest, or, The enchanted island. A comedy. As it is now acted at Their Majesties theatre in Dorset-Garden (London: H. Herringman, 1690), edited by John Dryden & William Davenant. Read the rest of...

The engineering librarians at the Art, Architecture & Engineering Library are pleased to announce that some engineering textbooks for the Winter 2016 term are available to you in full text online through Library subscriptions.