We will be closed for the rest of the holidays and plan on resuming our normal hours on the first day of classes next year, January 4th.Have a great break!

Here are our top 10 games played in the archive for the month of November.Our newer Batman and Gears of War games quickly rise in the ranks, with a few familiar favorites also making an appearance. 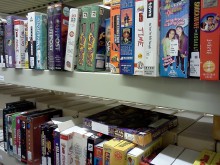 American Libraries Magazine recently published an article featuring the Video Game Collection at the Library of Congress. According to the article, the collection preserves every game turned in for copyright registration, which works out to be about 10% of the games published each year. They collect the games themselves, along with promotional materials and guides associated with each game.